Gibellini ahead by two at Keperra Bowl

James Gibellini has fired rounds of 69-66 for a two stroke margin over Jordan Zunic and Viraat Badhwar at the Keperra Bowl being contested at the Keperra Country Club in Brisbane.

Gibellini is yet to claim a National Selection event with his best finish a tied 6th at this year’s Lake Macquarie Amateur after reaching the semi-finals of the 2011 Victorian Amateur and recording a top-10 finish at the Port Phillip Amateur. 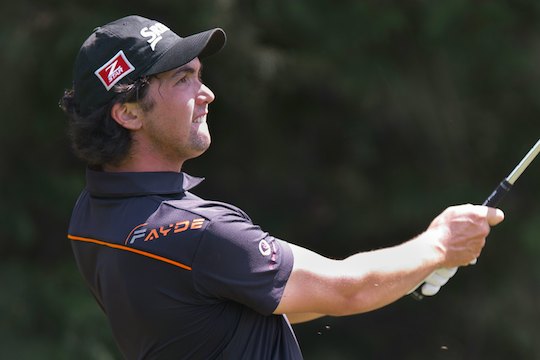 James Gibellini leads the Keperra Bowl after the second round by two strokes over Jordan Zunic and Viraat Badhwar (Photo: Anthony Powter)

The Gold Coast golfer will have his work cut out with an impressive list of contenders hot on his tail for this National Trial event title.

Zunic, 91st in the world amateur rankings according to the R&A, continues to impress following a stellar international season where he recorded top-10 finishes at the Scottish open and St Andrews Links Trophy before reaching the top-32 at the British Amateur championship.

The Bonnie Doon-based player can easily erode Gibellini’s two stroke margin and is capable of shooting low in these bigger events.

Zunic is coming off a runners-up finish at the Mandurah Open Amateur and is well poised to claim his maiden National Trial Event title in Brisbane.

Cameron Smith should never be discounted and rounds of 71-67 has the world number 21 just three behind the leader in a tie for 4th with Aaron Wilkin and Brady Watt.

Smith was dual medallist at the Australian Amateur in 2011-12 and was our top individual performer at the World Amateur Teams Championship in Turkey a few weeks back where the Queenslander finished a creditable tie for 31st in the individual result.

Smith is dangerous in these National Trial events and with two more rounds pending, he should seriously challenge this field at Keperra.

Former Lake Macquarie Amateur champion, Brady Watt, is also in the mix after two rounds of 69, four strokes behind Gibellini.

Defending champion Jake Higginbottom opened with back-to-back rounds of 71 to be seven off the pace and will need to score low over the closing two rounds to make an impact.

The cut fell at 7 over par.