Last week over 230 players competed among the three sites, with 57 advancing to Final Stage, which will take place 11-16 December at PGA National in Palm Beach Gardens, Florida. 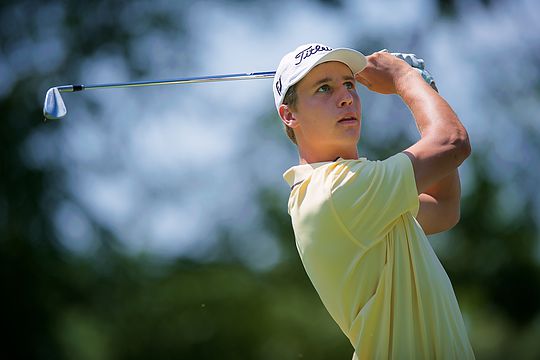 Gibson finished in a share of 4th position at Kingswood in Texas while Goss was tied for 15th in McKinney in Texas. Both Aussies are assured of at least conditional status on the 2015 Web.com Tour, with the potential to achieve full status at Final Stage.

The 28-year-old Gibson comfortably advanced to Final Stage by six shots. The former Lismore-based Gibson rose to fame in May 2012 by shooting a 16-under 55 at River Oaks Golf Club in Edmond, Oklahoma, a round eventually recognised by Guinness World Records as the lowest in history.

He also qualified for this year’s Open Championship, making the cut and playing with Tiger Woods and Jordan Spieth in the third round.

Goss, 20, played two seasons under the US Collegiate system before turning professional in June. He was runner-up at the 2013 US Amateur, the year after winning the Western Australian Open on the Australasian Tour and was the only amateur to make the cut at this year’s Masters Tournament, finishing in 49th place.

Goss played seven PGA Tour events under sponsor’s invitations as a professional, making three cuts and collecting US$37,160, to finish 326th on the money list – well short of his bold attempt to earn a spot in the PGA Tour’s Top-125.

Three more Second Stage events are scheduled for this week in Florida and California.

The final stage will consist of six rounds with playing rights on the secondary tour initially determined by a player’s finish position and is subject to change as a result of the periodic reorder throughout the season. The winner and ties are exempt for the 2015 season and from the periodic re-order.