Australian Rhein Gibson came out on top with a 21-under 193 to capture the win at the weather-affected BMW Charity Pro-Am on the Web.com Tour on Sunday.

Gibson carded a bogey-free 8-under 63 to overcome a two-shot deficit to start the round, nailing three birdies and an eagle on the front nine before carding three more over the back nine. 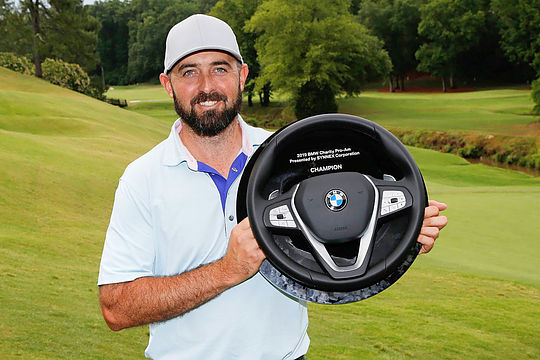 Gibson had been flirting with victory this season, recording three top-10 finishes, including a recent fourth place and had made the cut in eight of 13 Web.com tour events. He currently sits seventh on the money list following Sunday’s win.

“I’ve definitely put myself in some opportunities before to win, but it just didn’t go my way on Sunday,” said Gibson.

“It was good to get in the hunt again and actually close it out with a bogey-free round. If someone shot 9 (under) and beat me, I’d still be pretty happy with 8 (under).”

“Words can’t really explain it right now, but I’m super over the moon.”

Gibson last played the PGA Tour in 2016 but was unable to retain playing rights for the next season, moving back to the Web.com Tour. Now he’s a more seasoned and experienced player who is ready to test his skills against he world’s best next season.

“I think I’m a more well-rounded player all round,” remarked Gibson on Sunday. “I didn’t get many opportunities the year that I did have my card, but really looking forward to getting back out there.”

Before Sunday, Gibson was likely best known for shooting a 16-under 55 at River Oaks Golf Club in 2012. The round set a Guinness World Record that still stands.

Brett Drewitt, who qualified to play in this week’s US Open at Pebble Beach, was the next best Australian finishing in a tie for 52nd position.