The last twelve months have not been easy for Matt Giles.

Injury battles, breaking into his rookie year on the Nationwide Tour and struggles on the course all compounded to a season the 22-year-old was glad to see end. 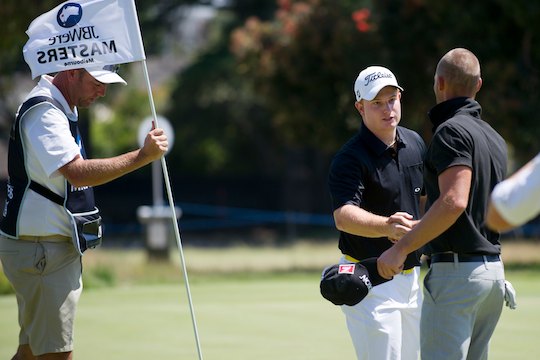 Giles’ decision to skip PGA Qualifying school and return back to Australia to work on his game with coach Barry Bent at Woolooware in Sydney’s south has been the change he was after.

A three-under-par second round 68 adding to his opening round of 67 to be at seven-under-par at the JBWere Masters at Victoria Golf Club, has Giles one ahead of overnight leader Ian Poulter.

“I didn’t hit the ball as well today as I did yesterday. There is a few holes out there where you can really take advantage. But at the same token if you get it in the wrong position you can easily make a bogey.”

It’s the second occasion in as many starts in Australia where Giles has caught our attention.

During the final round of the Australian PGA Championship he fired into contention to at one stage lead the field over Robert Allenby and Greg Chalmers.

Giles finished a creditable tie for 14th at Coolum and pocketed $21,720 in the process, half what he’d made this year on the Nationwide Tour this season where from twenty-three starts he collected just under US$50,000 from eight cuts, including a top-10 with a 4th place finish at the Mexico Open and two top-25 finishes.

“I had a rough finish to the Nationwide season,” says Giles regarding his rookie year.

“I didn’t play anywhere near as well as I know I can. That being said, I learnt a lot. It was my first full year as a pro and playing out on tour.”

Giles has conditional status for 2012 which will probably gain him five to eight starts on the Nationwide Tour.

“At least I’ve something to build on,” he says.

Without jumping to conclusions as to how his tournament will pan out at the JBWere Masters, Giles knows there is still plenty of golf to be played.

“We will see if my score holds up,” says Giles.

“I would not be surprised if some of the guys go out this afternoon and post a good score. It I happen to have the lead overnight, then that’s great and that’s the position I want to be for the weekend.”

Defending champion, Stuart Appleby, announced ten minutes before being due to start his second round that he was withdrawing from the tournament with a back injury.

As the players headed into the afternoon round, Giles still held the lead at 7-under-par.