Turning pro in 2010 and winning the Vic Open in 2013, Matthew Giles at 27 years of age has elected to spend his winter months studying instead of pursuing an overseas Tour. 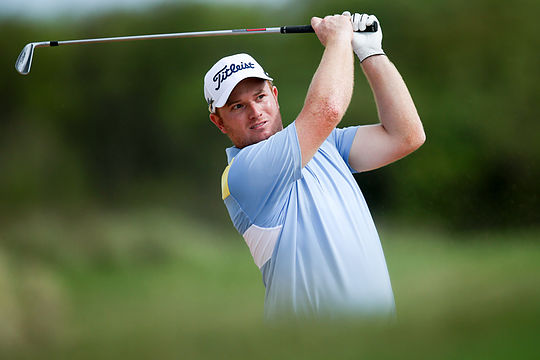 “I’ve been doing a Masters of Commerce at the University of Sydney. I just wanted to do something in addition to golf,” said Giles.

“Obviously I’ve got my status here in Australia and I still plan on playing all the bigger events but our schedule is fairly spread out during the year.”

“You’ve got events at the start of the year and events at the end. Then you’ve got that mid point where unless you’re travelling overseas you can do other things, so I just wanted to do some academic stuff.”

Spending time with his head in the books doesn’t seem to have affected his talent with the clubs.

Today Giles fired 6-under 66 to lead the Fiji International on 11-under the card.

“It was an early start this morning but I think we probably got the best of the conditions.”

While Giles may be focused on his Masters, a win this week would see him earn full status on the European Tour until the end of the 2017 season. An opportunity he hasn’t ruled out.

“I think it just comes down to what accessibility you have and what exemptions you have,” added Giles.

“If I keep playing well this week, at the Aussie PGA or any of those co-sanctioned events and I happen to get a card over there, then obviously I’d play, of course.”

But Giles still has two rounds to go and World Number 23 Brandt Snedeker is lurking just one shot behind him in a tie for second with overnight leader Anthony Houston.

“I told myself going out this morning 5-under or better would put me right where I want to be,” said Snedeker, who fired 7-under 65 today.

“To go out and shoot seven, I know I don’t have the lead, I think I’m one back, but I’m comfortable where I am going into the weekend, there’s a lot of golf left.”

While he is the tournament favourite, Snedeker is wary of the young talent surrounding him on the leaderboard.

“There are lots of quality players here. I’ve played against a bunch of these guys before, my whole life, it’s actually been kind of fun this week to see a bunch I haven’t seen in a while.”

“There are always new kids coming up and the next world beaters coming down the stretch so you have to bring you’re A game everywhere you go if you want to play anywhere in the world.”

Giles, Snedeker and Houston all played in the morning field with the wind picking up for the afternoon field making scoring a challenge.

Local hero Vijay Singh managed to hang on to make the weekend. He fired rounds of 70, 75 to be 1-over and tied 45th.

The second round cut was made at 3-over the card with Steven Bowditch, Peter O’Malley, Peter Lonard and Jason Scrivener all missing in action on the weekend.

The third round of the Fiji International will tee off at 8.50am with Giles, Snedeker and Houston out on course at 10.50am.