Glenelg has won the 2016 Simpson Cup after defeating defending champions The Grange 4.5-2.5 in the premier South Australian pennant series.

In a tightly fought contests Glenelg secured the first match of the day when Henry Duregon won his match against Scott Webb, 4&2. 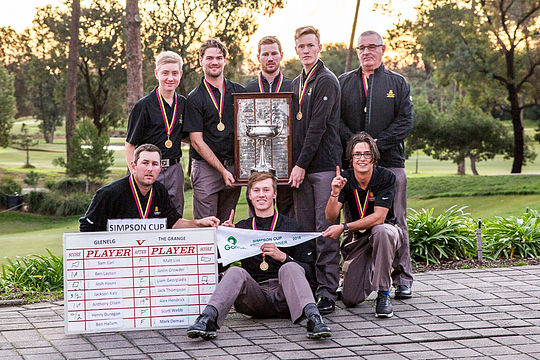 The Grange hit back through Mark Demasi, who despite being 4 down through 11, fought back to win the final hole, to claim his match 1up against Ben Hallam.

While Anthony Olsen was battling it out with Alex Hendrick at number five, Glenelg young-gun Jackson Kalz cruised to a 3&2 victory over Jack Thompson to secure a second point for his side.

Olsen would later be the eventual victor over Hendrick, draining a long-range putt to move Glenelg to one win from victory.

In match three, Josh Hayes and Liam Georgiadis who were all square heading to the par-five 18th before Georgiadis put the pressure on stiffing one to within six foot.

The lead was still 3-1 in favour of Glenelg, but Grange’s Matt Lisk was ahead in the number one match and the number two match was in the balance.

With the two unfinished matches deemed square the official result was victory to Glenelg 4.5-2.5.