American Lucas Glover fired five birdies in his final six holes for a closing round of 64 to take out the John Deer Classic on the PGA Tour.

It’s the first victory in over 10 years for Glover with his last victory coming at the Wells Fargo Championship in 2011.

The 2009 US Open champion entered Sunday’s final round four shots off the pace of overnight leader Sebastian Munoz, yet stormed home to outlast Ryan More and Kevin Na by two shots.

Glover is also the seventh player to win a PGA Tour event in the 2000s, the 2010s and the 2020s, joining only Dustin Johnson, Phil Mickelson, Sergio Garcia, Aussie Adam Scott, Brian Gay and Martin Laird.

The victory means Glover is now exempt on the PGA Tour through 2023, significant for him considering that he had to go through the Web.com Tour Finals in 2015 just to get his full card back on the PGA Tour. 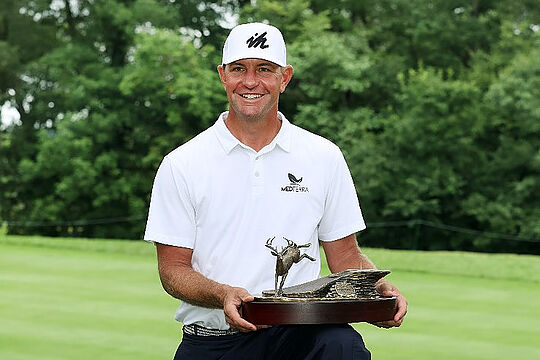 For his fourth career PGA Tour victory, Glover earned US$1,116,000 and 500 FedExCup points. He will move to No. 32 in the FedExCup standings and 40th on the money list. He’s also now qualified for a spot in the 2022 Players, Masters and PGA Championships.

As an amateur Glover attended Clemson University from 1998 to 2001, where he was named first-team All-American in 2000 and 2001 and honourable mention All-American in 1999. He was a member of the 2001 United States Walker Cup team and won three college tournaments and also won the South Carolina Amateur in 1998, 1999 and 2000 and the Sunnehanna Amateur in 2001.

Glover heads to this week’s 149th Open Championship at Royal St. George’s Golf Club, where he led after 36 holes in 2011, having secured his fourth top-10 finish in 25 starts this year.

Cameron Percy finished the best of the Australians in a share of 11th position, a final round 65 moving him 26 places up the leaderboard.

Rhein Gibson finished in a share of 34th at 10-under-par, with last week’s winner Cam Davis in a share of 55th position. John Senden and Greg Chalmers both made the weekend.