It’s fair to say that when the Australian Defence Forces send a golf team to play matchplay, they aren’t there for the scenery.

Still the golfers from the ADF team might argue that fact when they headed for Tuncurry Golf Club recently for a much-heralded match against a strong team from Golf NSW that were hellbent on revenge. 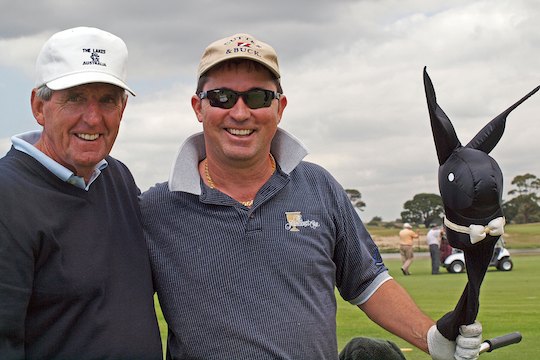 The only thing “loaded” was the Golf NSW squad, laden with single-figure markers and some real “hotshots” keen to keep the ADF boys honest at the testing Tuncurry layout.

The previous match at this venue about three years ago resulted in a comprehensive victory for the ADFGA team and the captain-manager of this year’s “squad” Tony O’Rourke from The Lakes Golf Club says his boys were desperate to avoid a repeat performance.

“Our team congregated at the Navy units in Forster on Wednesday evening and met the ADF players for a friendly barbecue,” O’Rourke said.

“The night typified the atmosphere of the next few days with plenty of goading and banter.

“Regrettably some of the ADF team were robbed during the night by balaclava-clad thieves who were chased away before they could avail themselves of any of their vehicles.”

When all the shenanigans were behind them, the fourball matches began on time the following morning with Roly Kinnear from the Lower North Coast Golf Association acting as official starter.

O’Rourke says his assistance in this capacity and also as scoreboard scribe was invaluable and greatly appreciated.

Golf NSW had a dream start when they won all but one morning match, and even that one was halved.

The afternoon Foursomes saw an encouraging fightback from the ADF team as Golf NSW edged past them 3.5-2.5.

That left Golf NSW with a commanding lead of 9-3 at the end of the first day.

The semi-formal dinner at Forster Tuncurry GC was attended by all players as well as Roly Kinnear, Gary Harmish (Forster-Tuncurry GC captain), Steve Green (vice-president FTGC) and representatives of Service Point (sponsors of the ADFGA).

The initiative to seat the following day’s singles opponents together at the dinner was well received and the speeches reflected the strong camaraderie that existed between these competitive teams.

The ADF team was unable to mount a comeback in the singles matches early on Friday morning.

Golf NSW fielded a team where half of the players were off a handicap of scratch or better.

And that was the contributing factor in the final decision of 19.5-4.5. O’Rourke said all matches were played in a competitive vein with an emphasis on sportsmanship and mateship.

“Some players travelled many hours to attend and indicated a commitment to the event in the future,” he said.

“Still congratulations must go to all concerned on a most worthwhile coming together with our armed forces through the forum presented by the great game of golf.”