Some of golf’s best players donned clothing and grabbed clubs of a bygone era to help youngsters enjoy a brighter future.

As part of a year-long celebration of 100 years insuring America, the Zurich Insurance Group gave seven PGA Tour golfers the chance to express their style with a vintage twist at the 100-Year Challenge prior to the recent Zurich Classic of New Orleans. 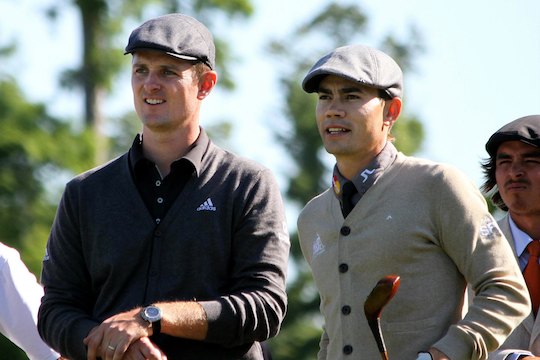 Justin Rose, Camilo Villegas and Rickie Fowler were amongst seven PGA Tour players, who took part in the 100-Year Challenge

“When it comes to insurance and golf, 1912 was an important year. It’s the birthdate of golf legends Sam Snead, Byron Nelson and Ben Hogan and Zurich’s founding in the United States,” said Mike Foley, CEO North America Commercial for Zurich.

Since becoming title sponsor of the New Orleans Classic, and just months before Hurricane Katrina, Zurich has worked with the ‘Fore! Kids Foundation’ and raised more than US$8 million for various charities throughout southeastern Louisiana.

“The hardest thing was making contact with the ball wearing this jacket,” said Fowler wearing a full cashmere jacket with tie.

Zurich promised $1,000 for each players designated charity and an additional $1,000 for each birdie though only Villegan and Crane managed birdies over the three holes to finish tied in first place at one under par.

The staging of the three-hole Challenge also saw the launch of the Zurich Charity Cup that involved a nine-week fan-based voting contest and social-media based competition that is to award $30,000 to the winning player’s charity, with the others to get $1,000.

The charities set to benefit included – Bradley who was donating his monies to the Vermont Disaster Relief Fund, Crane – St. Bernard Project, Donald – the First Tee of Chicago, Fowler – American Red Cross for Tsunami Relief, McDowell – G Mac Foundation, Rose – Blessings in a Backpack and Villegas – Give to Columbia.