Ahead of the TX Civil and Logistics WA PGA Championship, the trio visited the Evolution Mine in Kalgoorlie, Western Australia to tackle a par-3 golf hole built alongside the “world’s biggest bunker.”

Adjoining Evolution’s working open cut gold mine, the par-3 hole measures 294 metres with a 46-metres elevation change from tee to green and with the world’s biggest bunker just metres away from the green the hole was a daunting prospect.

“We all hit it left with our first few shots, I think we were definitely daunted by that “bunker,” it’s another 100 metre drop off right next to the green,” said Pike.

“Instinctively as a golfer you don’t want to hit it there.” 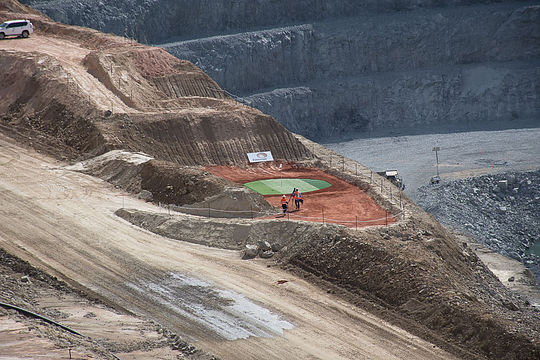 With their competitive juices kicking in the ISPS HANDA PGA Tour of Australasia players teed it up on the hole in a nearest the pin contest.

Using his driver, Fox won the nearest the pin challenge hitting his tee shot to seven feet of the hole.

“Any time I am hitting driver off the tee, I am not expecting to hit two more shots to make par that’s for sure,” said Fox.

“It was a pretty incredible backdrop with the mine, all the red dirt and grey rocks. It was plenty of fun and a great opportunity.”

Aaron Pike also found the green with his driver and was 8 feet from the pin. The pair went onto make par.

Meanwhile, Ryan Lynch failed to get up and down after pushing his tee shot into the “bunker.”

The players are in Kalgoorlie for the TX Civil & Logistics WA PGA Championship which tees off tomorrow at Kalgoorlie Golf Course with the winner decided on Sunday 13 May.

Being played for $125,000 and Official World Golf Ranking points the winner will also be fully exempt onto the ISPS HANDA PGA Tour of Australasia until the end of the 2019 season.

The final two rounds of the TX Civil & Logistics WA PGA Championship will be live streamed on PGA TV from 12pm AWST on Saturday 12 May and 10am AWST on Sunday 13 May.