Fabian Gomez won for the second time on the PGA Tour as the 37-year-old Argentine nailed his 11th birdie of the day to overcome American Brandt Snedeker on the second playoff hole at the Sony Open in Hawaii.

Starting the final round four shots from the lead, Gomez seized control with seven straight birdies starting at the 6th hole to move into contention through stellar iron approaches closing with a 7-iron to 10 feet on the par 3 17th, before sinking a 14 metre birdie putt on the 18th to force a playoff with the pair finishing at 20-under after Gomez fired a closing round 62.

“I felt good all week long and was about to put on a great round today,” Gomez said through a translator. “And I had Brandt Snedeker in front of me. I got on a streak with seven putts in a row. And it makes me feel good and feel like I could win the tournament.”

Gomez won the St. Jude Classic last June by four shots and was already a starter at this year’s Masters.

This victory moves him to No. 55 in the world and sees the tour journeyman securing another victory to remain on the main tour after a number of years playing the secondary tours around the world. 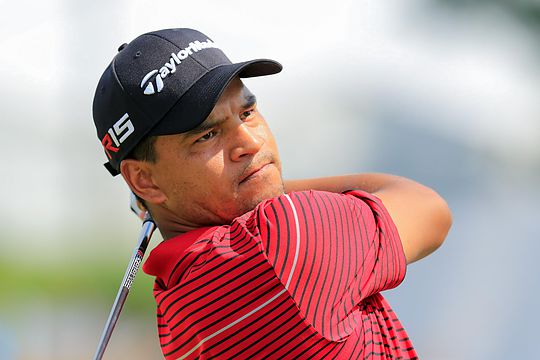 In 2010 Gomez won on the Web.com Tour at the Chitimacha Louisiana Open before finishing 12th on the money list to earn his PGA Tour card for the following season.

He failed to retain his card and headed back to Q-School where he managed a solid performance but not enough to return to the big leagues until 2013 where he retained conditional status after finishing the 2013 season at 133rd on the money list. A strong year on the 2014 Web.com Tour saw Gomez back on the PGA Tour for 2015.

It took all of two events into 2016 for the first anchoring controversy to arise. American Zac Blair’s putter appeared to be in contact with his shirt as he set up for his birdie putt from the fringe on the 17th hole on Sunday.

An on-site rules official saw it on television and asked Blair and his playing partners about it afterward.

“I was a bit in shock when he even asked,” Blair said. “I was asking him, ‘What is he talking about?’ But I honestly don’t know what to say, other than (that) I’m not even sure what happened until I guess I saw it. I definitely wasn’t anchoring it on purpose.”

Blair was cleared afterward to take 3rd position at 19-under, three strokes ahead of South Korea’s Si Woo Kim with England’s Greg Owen and American Kevin Kisner rounding out the top-5.

The leading Australian was Marc Leishman who finished in 28th position, John Senden was 42nd and Adam Scott 56th.

Cameron Smith and Steven Bowditch made the 36 hole cut but were unable to advance to the final round although both secured cheques.