American Talor Gooch has collected his first PGA Tour title taking out the RSM Classic closing with a final round 64 for a three shot victory over Canada’s Mackenzie Hughes.

Gooch’s total of 22-under tied the tournament scoring record set by Kevin Kisner in 2014. The RSM win was Gooch’s third top-5 in six starts this season and he has finished 11th or better in all but one of those events.

“You never want to feel like you’re digging yourself out of a hole to begin,” said Gooch.

“The putter was rolling even though I missed a couple good opportunities midway through the round, but made a couple good putts early and was able to kind of just keep my foot on the gas all day.”

The victory moved him to the top of the FedExCup standings and to No. 33 in the world ranking. The 30-year-old Oklahoma State former player’s best previous finish in the 2021-22 season was a tie for fourth place at the Fortinet Championship. Gooch also receives an invite to the Masters and qualifies for the Sentry Tournament of Champions at Kapalua. 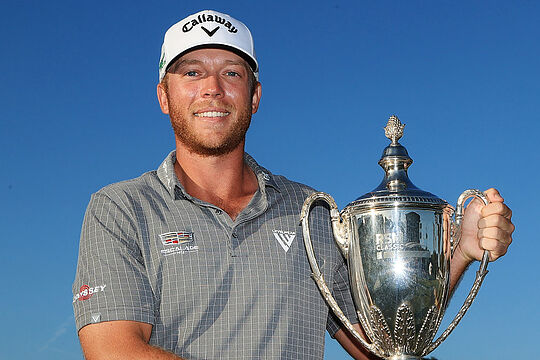 Gooch’s other professional win came in 2017 on the Web.com Tour at the News Sentinel Open where he finished the regular season in 6th place on the money list to earn his PGA Tour card.

As an amateur he won the 2012 Oklahoma Stroke Play championship. His best result so far in a major is a tie for 33rd at the 2021 Open Championship, although he recorded a top-5 result this year at The Players Championship.

Hughes, who won the RSM Classic in 2016, rallied from the group ahead of Gooch with four birdies among his last six holes, capped by a 13 metre putt at the 18th for a 62 to finish second at 19-under. Sebastian Munoz (65) was alone in third

Cameron Smith finished the best of the Australians in a share of 4th position, a closing round of 64 moving him eight places up the leaderboard. Adam Scott shared 37th position at 7-under-par to complete the Aussie contingent who made the weekend.