Josh Armstrong has finished the best of the Australians at the US Junior championship held at Flint Hills National Golf Club in Andover, Kansas.

Armstrong made it through to the round of 32 before going down to American Trent Phillips, 3&1. 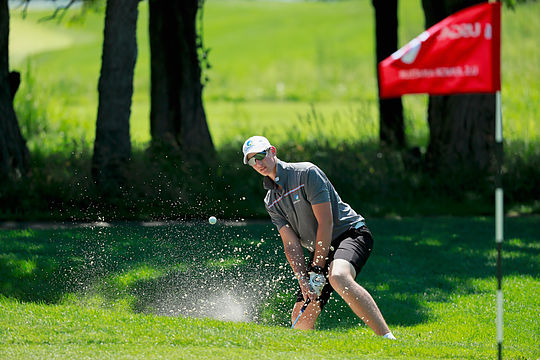 Armstrong had qualified as the number 5 seed after rounds of 69-66 during the stroke play section. Also qualifying was defending champion Min Woo Lee who was the number 7 seed and Cameron John.

Lee was bundled out in the first round of match play by American Noah Norton, 2&1, as was John who was the 47th seed. John went down on the 19th to American Aaron Chen.

Texan Noah Goodwin, 17, produced the second-biggest comeback in championship-match history, rallying from four holes down with eight to play to defeat fellow American Matthew Wolff, 1 up, to win the championship final.

“It’s definitely the highest by far,” said Goodwin of his career accomplishments, which includes being named the 2016 American Junior Golf Association Player of the Year.

Goodwin, who reached the US Junior Amateur final last year, losing to Aussie Min Woo Lee at The Honors Course, became the third player to become champion after being runner-up the previous year. He joins Mason Rudolph, the 1950 champion, and Tim Straub, the 1983 winner.

“It’s every junior’s dream to win the US Junior. It’s the most prestigious junior event in the entire world. Everybody knows about it, and to add my name among the greats like Jordan Spieth and Tiger Woods just means everything to me.”