South Africa’s Retief Goosen has come home strong with birdies across the final two holes to win the Senior Players Championship at the iconic Firestone Country Club in Ohio.

The newly-crowned Hall of Fame member had a rough start to the day with a bogey at his first hole before sinking an eagle at the very next hole to stamp his mark on the tournament. 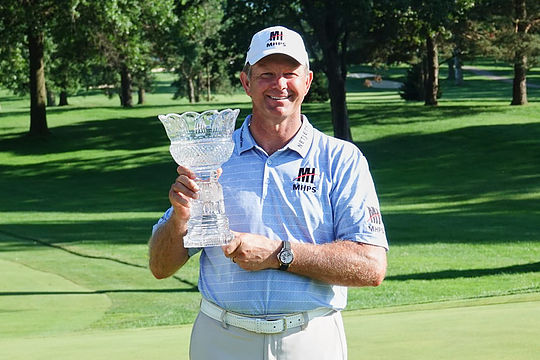 From that point on it was pars all the way until disaster struck at the par-4 11th hole with a double-bogey. The 50-year-old was again able to stay calm and made back-to-back birdies before dropping another bogey at the 14th.

He needed a solid finish to make a break from the pack and did so at the 17th by sinking a 5-metre putt for birdie followed by a 3.5-metre effort at the final hole for a round of 2-under 68 and a two shot victory over Jay Haas and Tim Petrovic.

“It’s been 10 years since I last won a tournament,” said Goosen, who won the last of his seven PGA Tour titles at the 2009 Transitions Championship.

“The nerves were there, and to have those nerves a little bit again in the last few weeks…you’ve just got to put yourself in a position all the time to get used to it again and that’s what I’ve done and it finally paid off this week.”

“It was tough to get close, tough to make birdies, but managed to finish with four birdies in the last six holes or seven holes, so it was nice to pull it off.”

While Goosen hasn’t figured on the PGA Tour for almost a decade, prior to that he amassed almost 40 professional titles around the world including two US Open titles and finished in the top-3 at the Masters four times in a six year stretch from 2002.

David McKenzie was the sole Australian in the field and enjoyed a solid finish in a tie for 30th place to take his earnings this season to US$185,000.