Retief Goosen fired a closing round of eight-under 63 to cement a four-stroke victory at the Hoag Classic on the PGA Tour Champions for just his second win in 62 career starts on the senior tour.

Goosen finished with a 54-hole total of 15-under par. His lone previous senior victory came in the 12th start of his rookie season at the Bridgestone Senior Players Championship. 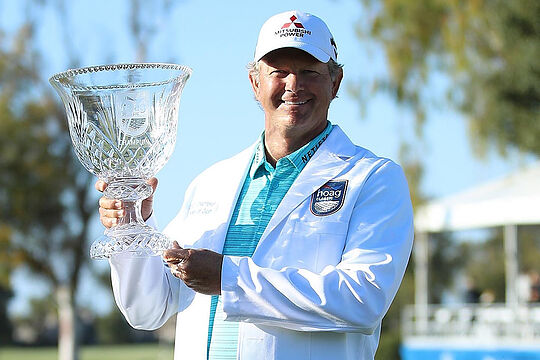 The two-time major champion from South Africa entered the final round trailing countryman Ernie Els by a stroke but came out firing early with an eagle-birdie-birdie start to make the turn in 5-under 30 and added four birdies and a lone bogey on the back nine.

“The swing felt great, I drove it nicely this week, a lot of good iron shots,” said Goosen. “I can’t complain. Obviously you win by three or four, you played well.”

Rod Pampling had another good tournament finishing in a share of 10th position to be the best of the Australians. The finish was Pampling’s second top-10 result from four starts and sees him currently 17th on the Schwab Cup rankings.

Stuart Appleby finished in a share of 52nd position followed by Stephen Leaney in a share of 69th with David McKenzie in 75th spot.