Gordon returns to PGA Tour thanks to Boise Open win

On the par-4 18th for a sudden-death playoff hole Gordon was the only member of the trio who played conservatively with a 2-iron off the tee. He was also the only one who made par with the other two players each carding a double-bogey six. 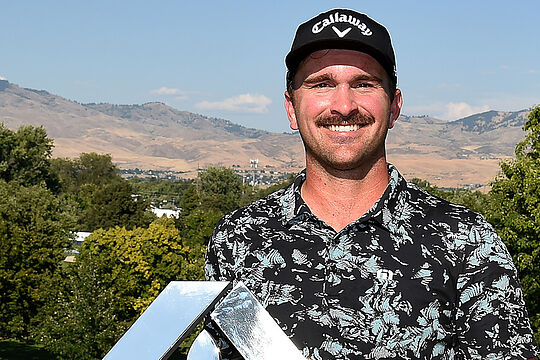 Gordon fired a final round 8-under 63, to erase a seven-stroke deficit and force the playoff before securing his first Korn Ferry Tour victory and a return to the PGA Tour.

“I’ve been on the PGA Tour, I got there quickly, I lost my card,” said Gordon. “I’ve seen both sides of it, so understanding it’s not life and death has helped me a lot this year, because it felt like life and death last year. Going through all the different processes of this profession, (if) I go out and just play free… over time it’s going to pay off.”

“Today – well it just happened so fast but I’ve kept a positive mindset and be ready if the opportunity came.”

Gordon certainly has been a model of consistency this season with five top-10s, all of which were finishes of tied 6th or higher. In the two events leading up to this week’s Albertsons Boise Open, Gordon recorded back-to-back T5s, moving him up to 33rd on the Korn Ferry Tour Regular Season Eligibility Points List.

Gordon is not the only one headed to the PGA Tour. While Knowles settled for a tied 2nd finish, he secured another one of the PGA Tour cards available. Daffue had already earned his PGA Tour card before coming to the Boise Open via the regular-season points list.

Harrison Endycott, who already has his playing rights on the main tour next year secured, finished the best of the Australians in a share of 18th position, with Min Woo Lee and Jason Scrivener in a share of 26th position. Aaron Baddeley shared 37th position to round out the Aussies making the weekend.

The cut came in a 5-under-par with Anthony Quayle, who had made a last-minute dash to the US from Asia, missing out.