Goss loses to Fitzpatrick in US Amateur final

Oliver Goss went down to England’s Matthew Fitzpatrick, 4&3, in the 36-hole final of the US Amateur Championship being played at The Country Club in Brookline, Massachusetts.

Fitzpatrick became the first Englishman since 1911 to hoist the Havemeyer Trophy as US Amateur champion. Harold Hilton won the championship 102 years ago at The Apawamis Club in Rye, New York.

“I can’t really describe how I’m feeling at the minute. That’s sort of what everyone wants in golf, wants to achieve, and I’m pretty sure Justin Rose said that after his US Open that it’s nice to go down in the history books.”

Goss, who was bidding to join Nick Flanagan and three-time champion Walter J. Travis as the third Australian to capture the US Amateur, trailed by one hole after the morning round and through the final missed a number of critical putts and was unable to place any real pressure on Fitzpatrick. 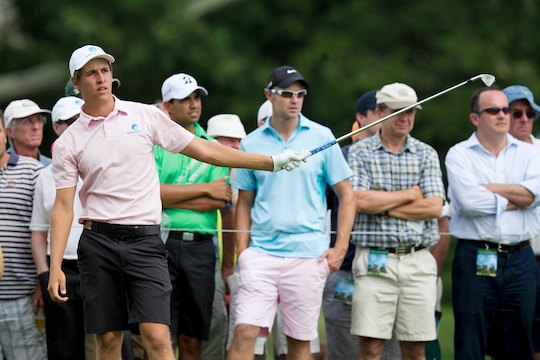 Oliver Goss reacts to his tee shot on the 20th hole during the final round of match play at the 2013 US Amateur (Credit: USGA/John Mummert)

“I was trying my hardest, had a game plan,” said Goss.

“I couldn’t get any momentum going.”

After the morning break, Goss had squared the match on the first hole of play when Fitzpatrick was unable to convert a 7-foot par putt.

Fitzpatrick, who is number two in the World Amateur Golf Ranking, then won the next two holes to lay the foundations for his victory.

It would prove a pivotal part of the final, damaging Goss’ chances as the Aussie was forced to play ‘catch-up’ golf for the remaining of the final.

“To win the first hole in the afternoon and be square, you’re right back where you started; it’s a level playing field,” said Goss.

“To give up two holes straightaway was crushing. It was quite big in the match.”

Fitzpatrick then won the 32nd and 33rd holes with a pair of par 4′s, to wrap up the championship. He missed the 505-yard 14th to the left of the green, but got up and down.

The Northwestern University-bound Fitzpatrick then made a 5½-foot putt for par on the 15th, while Goss was unable to hole his short par putt.

“My putting hasn’t been really great this year,” admitted Goss.

“I’m trying to work on it. So I need to work on that. But I’ve learned that I do have the ability to reach the finals and have the opportunity to win, which is great.”

“I’m looking forward to next year’s championship and the next 12 months with the opportunities I’ve been given to play in a couple of majors.”

By reaching the final, Fitzpatrick and Goss have each earned an exemption into the 2014 US Open at Pinehurst Resort & Country Club – provided they remain amateurs – and a likely invitation to next year’s Masters Tournament. Fitzpatrick is also exempt from qualifying for the 2014 British Open.