Goss spearheads Aussies at US Amateur

Oliver Goss has fired a second round 66 to be Australia’s top qualifier at the US Amateur Championship in Colorado.

Goss carded a 72 to sit in 64th position after the first round, but following today’s stellar round finds himself at 3-under-par and well inside the desired top-64. 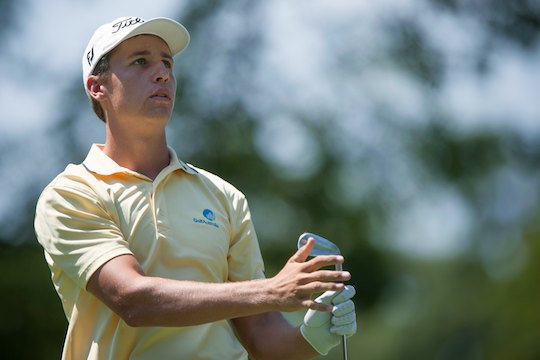 Oliver Goss spearheads the Australian contingent at the US Amateur finishing the qualification series at 3-under-par with scores of 72-66 (Photo: Anthony Powter)

Brett Drewitt is another to qualify with rounds of 69-71 to be at 1-under-par as did Matt Stieger, with the 2011 Australian Amateur Champion firing rounds of 71-70 to finish at even with the card.

Todd Sinnott carded an impressive second round 69 to also qualify after opening with a 73.

Cameron Smith turned his championship chances around, rebounding with a stellar second round of 66 – the second lowest score for the day – after opening with a 77.

American Bobby Wyatt took medallist honours with rounds of 64-68 to finish at 9-under-par, two strokes ahead of Cheng-Tsung Pan from Chinese Taipei.

Wyatt, who is number two in the World Amateur Golf Rankings, was an All-America selection in his sophomore year at Alabama in 2012.

Earlier this season he won the Sunnehanna Amateur, finished runner-up at the Southern Amateur and secured another runner-up finish to Daniel Nisbet at the Players Amateur.

Australians to miss the cut include Daniel Nisbet with rounds of 71-75, Ryan McCarthy who opened with a 67, only to card a second round 79, Jake Higginbottom after rounds of 76-71, Rory Bourke with scores of 74-73.