The South African, who won all four of his previous European Tour titles during a remarkable 2012 season, had been five clear at the halfway stage after following a sparkling opening 62 with a round of 66. 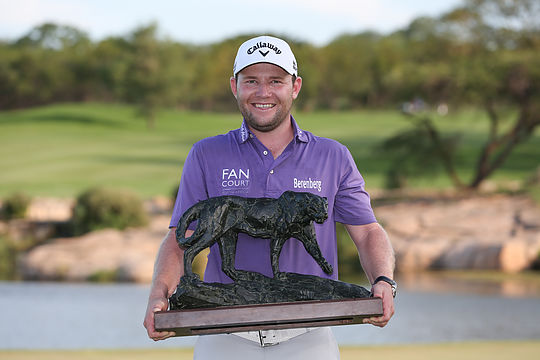 However, a third round 72 kept him 16 under par and saw Dane Lucas Bjerregaard close to within one of the lead.

The anticipated charge from the chasing pack never materialised, however, as a four under par 68 gave Grace a 20 under total and comprehensive seven stroke margin of victory over compatriot Louis Oosthuizen.

Last year’s Challenge Tour Number One Andrew Johnston was third on 11 under, with Nedbank Challenge winner Danny Willett and Trevor Fisher Junior tied for fourth a whopping ten shots behind the winner.

“It’s special to win it wire-to-wire, more so because it’s in front of a local crowd. It was a pretty flawless round today and the perfect way to finish off an incredible tournament – a great week in the office.

“I’d like to start by thanking Mrs Rupert and Mr Rupert – this establishment here is just something spectacular. It’s also been a long year, a hard, year but now it’s a fairy tale ending just before Christmas.

“One of the main things this week has been the driving; I just put a new driver in the bag in Dubai and that’s been the key this week.”

Grace swiftly doubled his overnight advantage when Bjerregaard bogeyed the first after finding a greenside bunker, and Grace birdied the second after an excellent pitch to tap-in range to pull further clear.

A birdie from five feet at the fourth was followed by a gutsy par save from sand at the short fifth, but Bjerregaard got up-and-down for birdie at the driveable sixth to close to within three.

However, the 23 year old Dane was dealt a major setback at the short seventh when he found the water and ran up a triple bogey six, and his afternoon unravelled from that point as he took 50 shots on the back nine to tumble down the leaderboard.

Grace failed to get up-and-down at the seventh and sporadically came under pressure from Oosthuizen, Willett and Johnston.

The 26 year old kept them at arm’s length by getting up-and-down at the driveable 11th for birdie and two-putting the long 13th and 15th for further gains.

A poor bunker shot at the 16th led to bogey, but nearest challenger Willett dropped six shots in the last three holes and Oosthuizen found water at the last to alleviate any lingering pressure.