Branden Grace produced a stunning final round of 62 for a tournament total of 21-under par to claim his maiden South African Open by three shots at Randpark Golf Club on Sunday.

Grace put on an impressive display of putting enroute to his three-stroke victory over countryman Louis Oosthuizen. 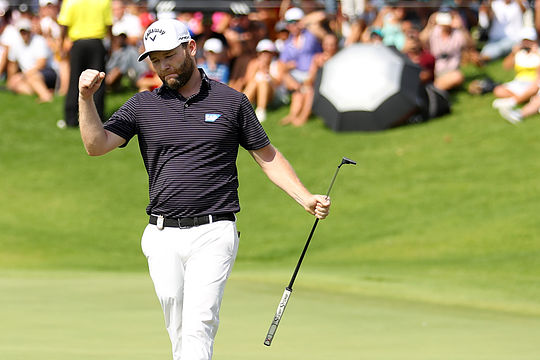 “That was remarkable,” Grace said after securing his ninth career European Tour victory and his first since 2017. “I played flawless golf, and I can’t remember the last time the putter was that hot.”

Grace needed just 22 putts on his closing round, and that produced a stretch of 12 holes in 10 under par.

This victory in claiming the national open also gives Grace every national title from his home country adding to his previous wins at the Joburg Open (2012), Alfred Dunhill Championship (2014), the Dimension Data Pro-Am (2015) and the Nedback Golf Challenge (2017).

“Obviously any player wants to win their national open,” said Grace. “This was the one that had evaded me and one I really wanted. This means so much for any South African, winning on home soil and it’s such an emotional feeling.”

The win, Grace’s first world wide win since 2017, also gets him a start at this year’s Open championship at Royal St George’s for his ninth straight Open appearance. That stretch includes a T6 finish in 2017 at Royal Birkdale, when he became the first player to shoot 62 in a major.

Grace also moves to the top of the Race to Dubai standings with the victory coming at his second event of the 2020 season. Grace also played himself into contention at the Alfred Dunhill Championship, the European Tour’s season-opener, where he finished in a tie for 3rd place.

The next event on the European Tour is the first Rolex Series tournament of the season, with the Abu Dhabi HSBC Championship taking centre stage on Thursday in one of the tour’s biggest events of the season and with the winner of the event almost certainly taking the lead in the Race to Dubai.

Maverick Antcliff finished the best of the Australians in equal 13th place with Min Woo Lee another shot back in a share of 15th.