South African Branden Grace has completed a two-shot victory in the Alfred Dunhill Links Championship in Scotland and immediately set his sights on topping the European money list.

Grace, who collected his fifth European Tour win of the season on Sunday, is now only 730,000 euros behind leader Rory McIlroy and is up from 12th to 3rd position on the money list. 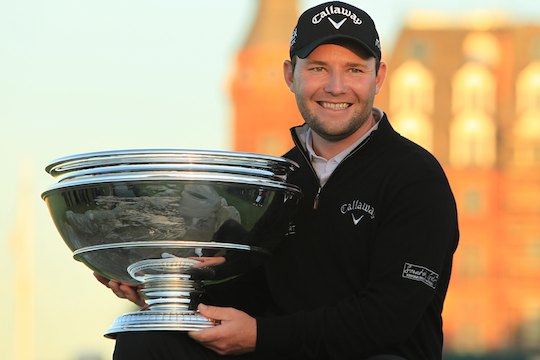 Grace closed with a two-under 70 over the Old Course to finish at 22-under, with the fast-rising Olesen coming in with a 68 to collect second position at 20-under.

“It feels awesome,” said Grace, who has risen from outside the world’s top-300 to inside the top-40.

“I had goosebumps thinking this morning about Louis [winning on the Old Course] and the possibility of holding a trophy here myself. It was a tough day, but the putter started working and that’s all I needed to do.”

Alone in third place, four strokes off the pace, was Alexander Noren of Sweden, while another Swede, Joel Sjoholm, was fourth a further two strokes back.

Scotland’s Stephen Gallacher, winner in 2004, finished in a tie for fifth after incurring a two-stroke penalty for playing the wrong ball at the 16th.

The best of the Australians was Ashley Hall at 11-under-par to be in a tie for 22nd position.

Grace, who became the first wire-to-wire winner on The European Tour season, is a product of the Ernie Els Foundation, following in the footsteps of Louis Oosthuizen, who won the British Open at St Andrews in 2010, and 2011 Masters winner Charl Schwartzel.