Branden Grace has claimed a thrilling victory at the Puerto Rico Open after closing eagle, birdie for a final round 66 to edge out Jhonattan Vegas and in the process win his second PGA Tour title.

The victory brings Grace’s professional win count to fourteen, including nine European Tour wins and it was his first title since the South African Open at home in January last year. 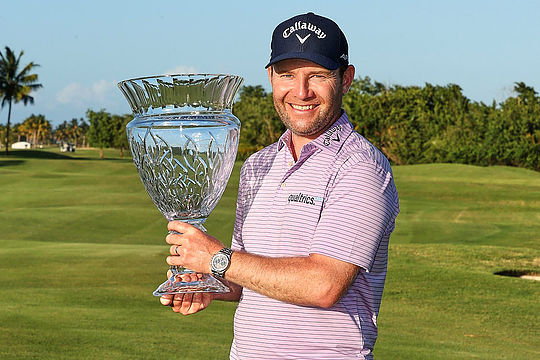 It was an emotional victory also for Grace who lost his father less than five weeks ago in South Africa to COVID-19 complications.

“It was an emotional day,” said Grace. “I thought about him a hell of a lot out there. The last tee shot, I was really struggling. I knew he was watching over me. I knew he was guiding me.”

Grace entered this week’s event ranked 147th in the world. Five years ago Grace was ranked as highly as 35th in the world, had won seven times on the European Tour and had performed consistently in a number majors recording five top-10 results including a share of the 54 hole lead at the 2015 US Open at Chambers Bay.

At the 2017 Open Championship at Royal Birkdale, Grace became the first player to shoot 62 in a major on his way to a tie for sixth.

From 2019 through to the end of 2020, Grace missed the cut in 23 of his 52 events entered. His last professional victory was his home title at the 2020 South African Open.

“It’s been a very tough couple of years, and a tough couple of months, and it’s just nice to have all the support back home with my wife and my son and my family and everybody back home. After all that we have been through, there’s some light at the end of the tunnel.”

The victory gets him into the 2021 Players Championship, the PGA Championship, select invitational events such as the Arnold Palmer Invitational and the Memorial Tournament, the 2022 Sentry Tournament of Champions, and makes him exempt on the PGA Tour through 2022-23.

Cameron Percy was the best of the Australians recording a tie for 7th at 14-under-par, five behind Grace. Greg Chalmers also played well opening with rounds of 66-68 and went onto finish in a share of 22nd position finishing at 10-under-par.

Aaron Baddeley finished in a share of 30th position with John Senden rounding out the Aussies who made the weekend.