The victory capped an improbable run that started when Greaser survived a seven-for-two playoff on Thursday to take the 15th match play spot. 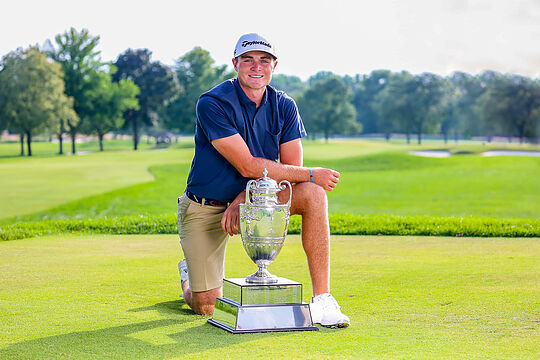 The senior at North Carolina University shot 6-under total during the four rounds of stroke play, and for about 30 minutes, he was convinced that he had missed the Sweet 16 cut by a shot. A couple of late bogeys moved the cut line and put him in the playoff, and from there he took the advantage.

Greaser defeated Matthis Besard from Belgium, 3&2 in the round of 16 and survived one of the best matches of the championship by beating Kelly Chinn 1 up in the quarterfinals. He never trailed in a tight semifinal match against William Mouw on Saturday morning, winning Nos. 14, 15 and 16 to pull away for a 3-and-2 win en route to the championship final.

Greaser has won twice, including the NCAA Yale Regional. He was an All-ACC selection, as well.

Greaser will return to the US Amateur championship at The Ridgewood Country Club in New Jersey. Last year at Oakmont, he made the 36-hole match play final last year, only to be defeated by James Piot.

During an impressive 2022 calendar year, Greaser was one of four amateurs to make the cut at the US Open, finishing in a share of 61st position at +17. He also participated in this year’s Masters, shooting rounds of 74 and 77 to miss the cut at +7.