The home side’s 16½ was their best ever points tally, and they secured victory with six matches to go against the USA’s 9½. 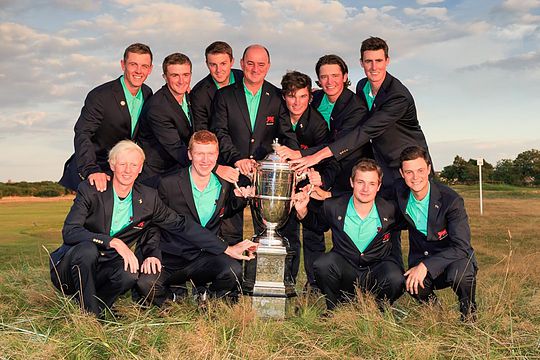 Leading 10-6 after the morning foursomes, they needed only 3½ from 10 singles matches. It’s only GB&I’s ninth Walker Cup win, but their fifth in the last six contests on home soil.

England’s Jimmy Mullen, who was GB&I’s leading points-scorer with a perfect 4-0 record, led the team’s afternoon domination of the singles in which they won five, halved three and lost just two matches.

England’s Ashley Chesters, at 26, the oldest GB&I player (3½), and Cormac Sharvin of Ireland (3) were the other leading GB&I performers.

College All-Americans Bryson DeChambeau, the 2015 US Amateur and NCAA Division I men’s individual champion, and Beau Hossler were the only USA players to win their matches in the final singles.

Hossler (3), DeChambeau (2½) and Robby Shelton (2) were the leading point-scorers for the USA.

The 2017 Walker Cup Match will be played on 9 and 10 September at Los Angeles Country Club in California.