Victory for Great Britain & Ireland in the 43rd Walker Cup broke a spell of three successive wins by the United States.

It was a Walker Cup that had everything. Chest bumps, high-fives and tears as the home team claimed a memorable 14-12 win over the Americans at Royal Aberdeen Golf Club in Scotland. 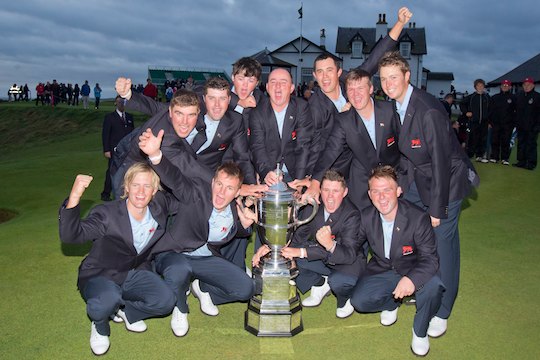 The victory marked only the eighth time in forty-two Walker Cup occasions the Great Britain & Ireland team has secured the prized cup.

The first day of play had Great Britain & Ireland leading over USA, 7-5, in a day marked with controversy after it emerged that Englishman Jack Senior’s caddie, Senior’s brother Joe, was a professional golfer.

Following deliberations by the rules officials is was decided the Senior and Sullivan 2&1 victory over Russell Henley and Kelly Kraft was to stand, primarily because the situation was only discovered after the match and that there was no perceived advantage for the Great Britain & Ireland team.

The home team then headed into the final day in the best position they had been in five Walker Cups with their noses narrowly in front, settling the stage for their historic victory.

After winning three of the four foursome matches in the morning’s final round, Great Britain & Ireland required only three points from the 10 singles matches in the afternoon.

Jack Senior, playing number 3, secured a critical half in his match with Nathan Smith, which gave the home side some breathing space.

Great Britain & Ireland still required 1 1/2 points from the seven matches in play, but the Senior half marked a momentum shift after the Americans had taken the opening two singles matches, including the prized scalp of Tom Lewis.

Cast as the underdogs seemingly by all bar the team and its inspirational captain Nigel Edwards, the home side upset the formbook and secured their win with three single matches still on the course.

“Fantastic, they are a very special bunch of guys,” said a jubilant Edwards.

“Our preparation and desire to win probably gave us the edge. I told my players that they all deserved to be here.”

Great Britain & Ireland had taken a 10 1/2 − 5 1/2 lead into the final singles matches but despite holding the advantage, many of the matches still had the potential to swing either way.

The Americans had quickly rebounded with Russell Henley accounting for Tom Lewis, 4&2, and with Jordan Spieth defeating Andy Sullivan, 3&2.

The situation meant that Jack Senior’s brilliant birdie putt from the front of the final green to snatch an unlikely half against Nathan Smith was crucial.

Michael Stewart’s 3&2 win over Patrick Rodgers, the 2011 Porter Cup champion, steadied the home team and he was among several outstanding performances over the weekend, including 17-year-old Rhys Pugh, who made it three wins out of three when he beat 2011 US Amateur champion Kelly Kraft, 2&1.

American wins in the afternoon singles came from Peter Uihlein’s 2&1 win over Stiggy Hodgson, Chris Williams’ 1-up victory over Alan Dunbar and Harris English won his match against James Byrne, 2&1.

The foundations for the home team’s victory over an American side containing the top four amateurs in the world were laid in a windswept morning session when Great Britain and Ireland came within a putt of a clean sweep of foursomes victories. Jordan Spieth and Patrick Rodgers halved their top-order match against Tom Lewis and Michael Stewart to deny Great Britain & Ireland taking all four encounters.

Spieth holed from 10 metres at the last to claim an unlikely half with Rodgers against Lewis and Stewart after the home pair had led the match by four holes with just six to play.

The victory for Great Britain & Ireland is significant and timely in many ways.

During the Australian summer Jack Senior, Andy Sullivan, Stiggy Hodgson and Tom Lewis taught our main amateurs a lesson in golf, with the English Elite squad featuring in all our main events and they capped of the tour demolishing the Australian team in the Ashes Series at Monash Country Club in March.

During their tour Senior won the NSW Amateur, Sullivan secured five top-10 finishes from six events and was in the final group in three events. Lewis was pipped by Peter O’Malley in a three hole play-off at the NSW Open before he took amateur medalist honours at the Australian Open for top amateur.

It’s not surprising then Great Britain & Ireland were able to account for a star studded American team in Scotland, despite all the attention being on the Americans.

Just when it seems things cannot get much healthier for Great Britain and Ireland in the professional game, so emerges a new crop promising their own rich future.

Like Ryder Cups past, a United States team who were seemingly unbeatable on paper were conquered on grass by the passion and pride, not to discount the level of skill, that’s so common now in Great Britain and Ireland teams.