Three-time European Tour winner, Richard Green, has posted a closing round 6-under 66 around Thurgoona Country Club to secure a two shot win at the NSW Senior Open on Sunday.

The Victorian entered the final day of the 54-hole tournament four shots behind overnight leader, Jason Norris, before reeling off three birdies each on the front and back nine of his winning bogey-free round. 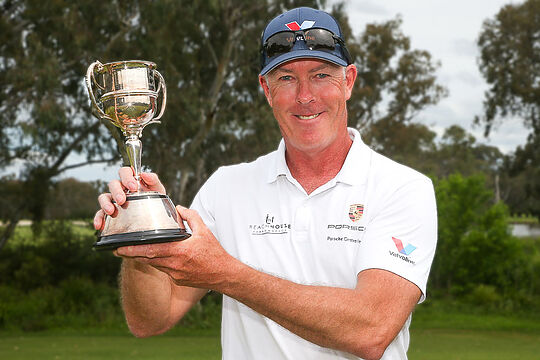 Despite three early birdies, Norris’ run for the title came to an abrupt end following a bogey at the 15th and a triple-bogey at the 18th. His 1-over 73 dropped him into outright third place behind Queensland’s Andre Stolz, who closed with a 70 for a 10-under total.

“I didn’t really think too much about it [winning] because I thought I might have been a little too far back, but I’m absolutely thrilled to win,” said Green.

“Browny [Green’s caddie] and I have been working really hard on my game for a long time and this is such a good confidence building thing right at the best time.”

“It’s really satisfying to see our work paying off, especially against such a great field like this.”

Green, who has also won two times in his rookie season this year on Europe’s Legends Tour, looks in some of the best form of his life.

Next on the schedule for the 51-year-old is a trip to the US in mid-November for a tilt at the Champions Tour Q-School.