What a few weeks it has been for women’s sport in Australia. Firstly we had Jan Stephenson’s entry into the World Golf Hall Of Fame and then this morning Ash Barty won the Birmingham Classic to ascend to world number one in women’s tennis.

And now 22-year-old Western Australian Hannah Green has added to that list with a superb wire-to-wire win at the KPMG Women’s PGA Championship in Minnesota.

Green becomes the first Australian women’s major winner since her mentor, Karrie Webb, claimed the Kraft Nabisco in 2006. The victory was also her first on the LPGA Tour and adds to her three LPGA feeder Symetra Tour titles.

“I’m pretty much speechless,” said Green. “I was really nervous the last five holes…I made a clutch putt and that was kind of what got me through another one. To make the one on the last is really is surreal.”

Green began the day with a slim one shot lead over Thai star Ariya Jutanugarn, however Jutanugarn slipped away with a final round 77, which left the door open for defending champion Sung Hyun Park to make her move. 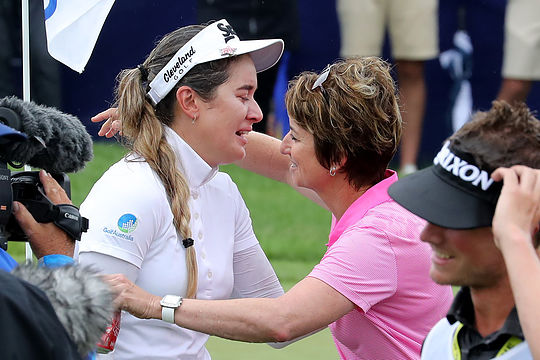 Park closed with a 4-under 68 to miss the chance at a playoff by a stroke at 8-under with England’s Mel Reid another two strokes back at 6-under following a breakout 6-under 66 to finish alongside Nelly Korda.

It was just four years ago that Green was on the other side of the ropes after winning the Karrie Webb Series scholarship to have a chance at watching their hero play in a major.

However, today the roles were reversed with Webb missing the cut and following Green around Hazeltine National as she played her way into Australian sporting history.

“I’m so proud, I caught myself a few times getting ahead of myself for Hannah and choking up thinking what a win would mean for her,” said a proud Webb, who won this event in 2001 amongst her seven major titles.

“I feel like I won a golf tournament. This is one of the best days I’ve had at a golf course in a long time. I could see at the U.S. Amateur [in 2015] that she was made to win LPGA tournaments.”

Green earns US$577,500 for her victory, which takes her season total to US$694,003 and close to $1 million in her short LPGA career with no doubt much more to come.

She is now projected to move to 17th on the LPGA Tour moneylist up from 62nd place.

Minjee Lee was the next best of the Australians in equal 30th place at 2-over with Su Oh another four shots back in a tie for 53rd.