She has been a professional for just eight months but Hannah Green already has one hand on an LPGA Tour ticket in the US.

The promising West Australian was on fire again last week with her seventh top-10 finish in just 13 starts on the LPGA’s secondary Symetra Ladies Tour. 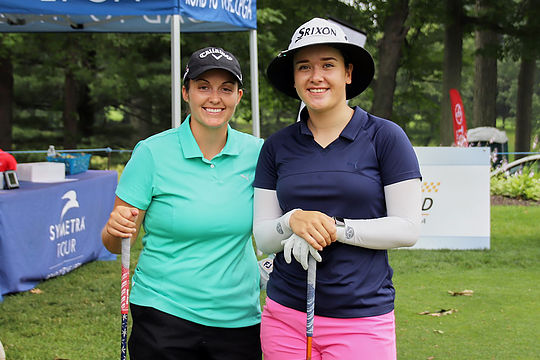 The 20-year-old fired a stunning eight-under-par 64 to add to her earlier 68 and zoom up to fifth on the Road to the LPGA rankings, which will see the top 10 at season’s end graduate to the main tour.

At least Green should not have to bother about Danish golfer Nanna Madsen standing in her way: Madsen earned one of the immediate ‘battlefield promotions” in scoring her third win of the season.

Australian golf fans have already caught a glimpse of Madsen’s awesome talent when she finished second to Ha Na Jang in the ISPA Handa Women’s Australian Open at Royal Adelaide earlier this year.

“I’m so happy with my third finish and shooting 64 (eight-under), my personal best,” Green tweeted shortly after she finished third.

Obviously the power of Madsen will be taken out of the equation too from the remaining Symetra Tour events should she take up her LPGA Tour rights whenever possible.

Another Aussie to impress was Adelaide golfer Steph Na, who closed with 67 to finish tied eighth at nine under, her first top-10 finish since 2014.

Perth’s Jayde Panos finished with a 69 of her own to finish in a tie for 23rd, her second-best finish of the season.