Two of the main drawcards from the Victorian Open’s inaugural staging at Thirteenth Beach Golf Links will return once again for the 2014 tournament to be played 20-23 February.

Former world number one Laura Davies will tee it up in the ALPG Tour women’s field whilst Richard Green from the PGA Tour of Australasia and European Tour will also return to the Bellarine Peninsula. 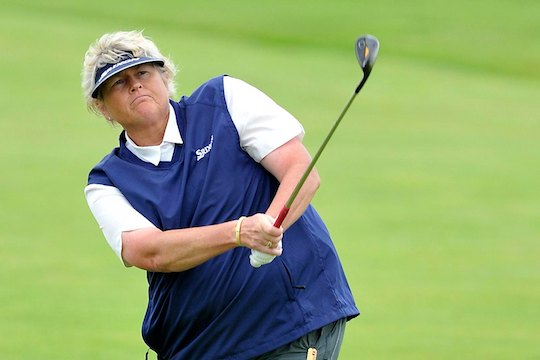 For Richard Green, a solid week at the Emirates Australian Open that included a second round six-under 66 and hole-in-one has boosted the 42 year old’s confidence.

A regular competitor on the European Tour, Green has carved out a successful career with six Professional victories including the 2004 Australian Masters and 2004 PGA Tour of Australasia Order of Merit.

The Melbourne born player said consistency is a key for his endeavours to be in contention late Sunday afternoon at the PGA Tour of Australasia’s upcoming Oates Vic Open.

“It’s nice to be back in back in contention again and playing some good golf and hitting some nice shots. I haven’t really hit the ball like this for a long time now,” said Green.

“I’ve had an occasional good glimpse like when I had the 64 in the last round of the Vic Open earlier this year but being able to piece it all together and play consistent golf under pressure in difficult conditions is a nice feeling.”

Having competed on the European Tour since 1996, Green enjoys returning home to compete on the PGA Tour of Australasia and particularly the Oates Vic Open.

“I’ve said this before; it was the most fun we had on tour all year and to be at home and down that part of the world,” added Green.

“Barwon Heads is a great destination and a very relaxing environment. The golf course is a lot of fun to play, there were so many people out there watching and it had a really good atmosphere.”

Green, a self-confessed speed demon also weighed in on his experience of going up in a War Bird fighter jet for the Life is Greener TV Show that on Saturday night took at the Australian Golf Writers Association Award for Best Golf TV Show.

“It was something I’ve never done before and I’m a bit of speed freak as you know but I didn’t expect it to feel the way it did,” added Green.

“To sit in there and experience the G-force upside down and flying around was a lot of fun. It was more physical than I expected too, bit like an old race car.”

Laura Davies, one of the world’s biggest names in the sport finished this year’s Vic Open in a tie for 7th at 13-under including a sensational opening round seven-under 67.

With 85 worldwide career victories including four major titles to her name, the galleries flocked to get a glimpse of the iconic British player.

Speaking from England, Davies talked about her first experience playing Thirteenth Beach and with the men in the unique format that is the Oates Vic Open.

“I love the format, it’s always nice to play alongside the men and last year we held our own as far as the galleries went. I loved both courses at Thirteenth, they were a good mix of wide open long hitting and then the tighter precision holes. It was in great shape.”

Davies, who has won at least one individual event in her 29 year career except for 2005 and 2011 has her sights set on challenging the defending champion and local girl from Cressy, Stacey Keating who like Davies was embraced by thousands of spectators that followed both golfers all week.

“For sure, I want to try and win at least one of the Aussie events and it’s always nice to try and take out the local favourite.”

“Crowds were great and as I said it was a nice surprise that they were as interested in us as the men’s event,” said Davies.

The recently turned 50-year-old added, “I absolutely love the area at Barwon Heads. We are staying in the same house right on the beach. I can’t wait.”