Major champion, Australia’s Hannah Green, has fired a superb 5-under final round 67 to deny Yealimi Noh her first LPGA victory at the Portland Classic.

Noh, who Monday-qualified for the tournament, held a three-shot lead heading into the final day but quickly came under fire from Green, who came out of the gates with three early birdies to pile the pressure on her opponent.

It was Noh, however, who made the turn in front by a stroke, and with another two birdies coming at the 12th and 14th holes she held a commanding three-shot lead heading to the 15th tee.

Unfortunately for Noh, this is where the dream turned into a nightmare with Green making a birdie at the 15th while Noh bogeyed the next hole to see her lead cut to just one.

Green once again turned the screws with a superb birdie at the par 4 17th against a par from Noh, which took the match to all-square heading to the par 4 18th hole.

The 22-year-old was able to hold on for par while Noh fell away under the pressure to record a bogey and hand the title to Green – the second of her short LPGA career. 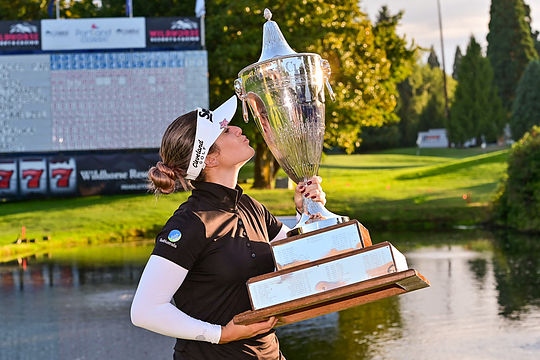 “I think what I did really well this week was just making sure I played every hole one at a time and every shot one at a time. I’m sure a lot of players say that but it’s sometimes really hard to do,” said the Western Australian.

“I think this confidence has definitely come from KPMG, and missing the cut last week, I had to work hard on my putting for this week because I know that’s where that’s where the money is this week.”

Green did well to keep it together after squandering the 5-shot lead lead she amassed with her career-best 63 in the second round with a third round 73.

“I think I can definitely say that KPMG [major], having that experience, definitely helped me, especially the last five holes. Grinding out and making sure that I stayed patient,” said Green.

The Perth-native takes home a US$195,000 (AUD$290,000) winner’s cheque and should move well inside the World top-20 when rankings are released overnight.

Despite an emotional rollercoaster today, Noh knows she has the game to compete with the best and sees a bright future ahead on Tour. There’s little doubt after her efforts today that the sponsors will be lining up to give her further exemptions this year.

“I played really solid and great. She stayed really strong throughout, so congrats to her. Yeah, it sucks, but hopefully I’ll come back next year after Q-School this year and play on the Tour next year.”

Noh was playing in her seventh event this year on the LPGA Tour, with her best finish coming at the Thornberry Creek Classic in early July, where she finished in 6th place.

Ironically it was at this very event that Canadian superstar Brooke Henderson won the title in 2015 after Monday qualifying.

Su Oh was next best of the Australians in a tie for 15th with Robyn Choi (T63) and Sarah Kemp (T67) the only other Aussies to make it to the weekend.