Hannah Green came from seven strokes back Sunday to win the Symetra Tour’s El Dorado Shootout at Mystic Creek Golf Club in Milford USA, breaking the course record with a bogey-free 8-under 64.

The win was Green’s second on the Symetra Tour and all but secures her way onto the LPGA Tour for 2018 having moved from 6th to 4th place in the Volvik Race for the card with just three events left. 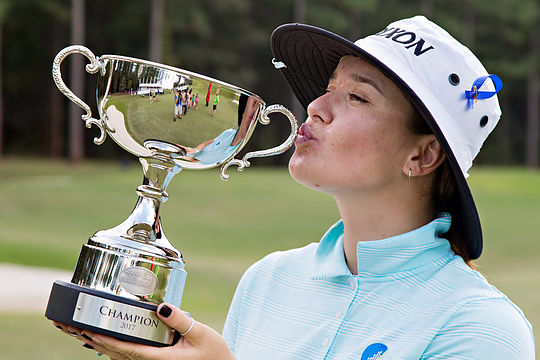 The victory was timely for Green and gives her the platform from which to compete on the main tour, a goal the 20-year-old set four years ago as a teenager.

“I set a plan and I wasn’t going to college in the US or studying in Australia, I just said that I was turning professional and I wanted to be on the LPGA,” said Green.

“I’ve been dreaming about this for at least four years so to have it come true is awesome.”

Green began the day in a tie for fourth and seven shots off the lead. Birdies on the first, fourth, fifth and seventh on the front nine moved her into contention at 7-under where she was still three shots off the pace of 36-hole leader, Philippines Dottie Ardina.

Then the Western Australian made her move.

Green made birdies on holes 11 and 12 to move into a four-way share of the lead with Celine Boutier, Ardina and England’s Charlotte Thomas. The birdie barrage continued for Green on 15 and 17 to take command of the tournament and closed with a par for a one stroke win over Boutier.

“Obviously I’m really happy and excited, but it doesn’t feel real quite yet,” said Green, who won the Sara Bay Classic in April this season. “I’m really pleased with how today turned out and I’m glad I shot a really good score to get the win.”

Green had eight birdies on the day. The round of 64 ties her personal best score, which she also shot in the final-round of the Danielle Downey Credit Union Classic in Rochester. She hit 17-of-18 fairways and 12-of-14 greens in regulation with just 28 putts.

“Seeing the previous couple of years’ scores, I didn’t think 8-under was really possible. But, I knew it wasn’t as tough or as firm as it was last year. I mean, I hit 17 greens and missed one fairway so I gave myself plenty of opportunities.”

The victory at Mystic Creek earned her a US$15,000 cheque, but more importantly paved the way to the LPGA Tour in the process.