NSW’s Nathan Green failed to capitalise on his share of the overnight lead, shooting a two-over 74 as Carlos Ortiz became the first Mexican-born player to win the El Bosque Mexico Championship on Sunday.

Ortiz broke out of his tie with Green with four birdies on his front nine at El Bosque Country Club and held a three-stroke lead before late bogeys on 16 and 17 cut his lead to just one with the par-five 18th still to play. 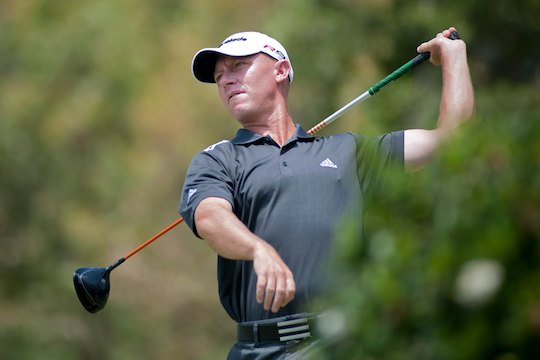 However, Ortiz reached the green in two and calmly two-putted for a final round four-under 68 and a 13-under total to claim a two-stroke victory over American Justin Thomas.

Green’s three bogeys on the back nine dropped him into a six-way tie for 3rd at seven-under.

“It’s an honour to win here in Mexico. It makes everyone so happy around here. I don’t have the words, it just feels great.”

Ortiz now has two victories in the current Web.Com Tour season and moves to the top of the Money List with $304,458.

He is just one win shy of an immediate ‘Battlefield Promotion’ to the PGA Tour last achieved by Australian Michael Sim, when he won three times in the 2009 season.

Green’s best finish on the Web.Com Tour since the 2005 Jacob’s Creek Open moves him to No. 39 on the money list.