Hannah Green has quickly knocked off the rust after long break from the game to record an emphatic six-shot win over Karis Davidson and Whitney Hillier at the mixed-gender Vic Open at 13th Beach.

Coming into Sunday, the 25-year-old lead by five shots over Davidson and Hillier and look set to run away with the title. However, two early bogeys and a matching set of birdies from Hillier saw her lead looking in jeopardy. 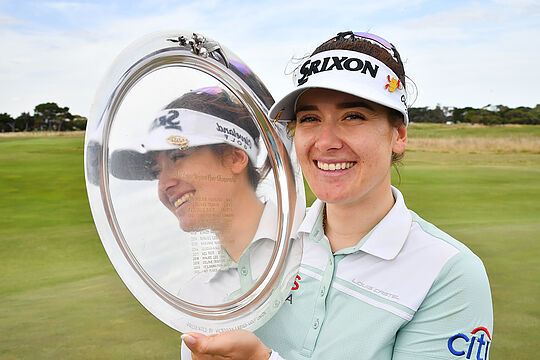 Heading into the back nine, the tables were quickly turned with Green getting her game back on track with birdies at the 12th, 14th and 17th holes while fellow West Aussie Hillier handed back her advantage with bogeys at the 11th and 13th holes to guarantee it was Green’s day.

“The Vic Open was my first ever professional event so it definitely has special memories for me coming here,” said Green.

“It’s nice to finally have my name on a proper trophy over here.”

“I haven’t seen a lot of these people in two years because I didn’t travel last year when there were a couple of events in January/February,” Green said.

“It’s been a big catch up and I think tonight we’ll celebrate pretty well.”

Cassie Porter and Green’s fellow LPGA Tour player Su Oh rounded out the top-5 in a share of 4th place on 5-under.

The cream of Australia’s women’s players will line up alongside the men again this Thursday at the inaugural The Players Series Murray River at Cobram Barooga’s Old Course.