The magnificent links courses in the south of Wales are rarely on the schedule for UK bound Australian Golfers.

However, last week 17 of Australia’s best amateurs got the chance to tee it up at two of the finest courses, Royal Porthcawl and Pyle & Kenfig, for the 121st British Amateur Championship. 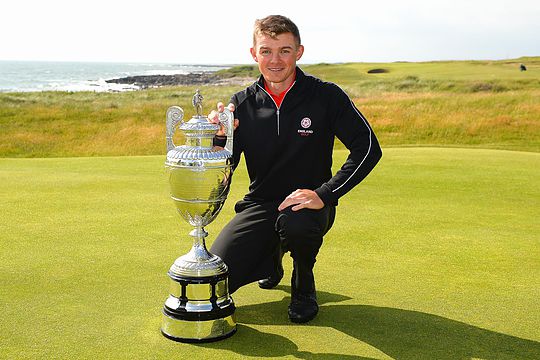 Overall it was a disappointing week for the Aussie contingent with no player reaching the quarter-finals despite seven players making it through to the match play stage.

Coming off a successful stint at the St Andrews Links Trophy and the Scottish Stroke Play hopes were high and for some this was the last amateur event to advance their World Amateur Golf Ranking to gain entry to the US Amateur Championships to be held at Oakland Hills in mid-August.

A win would guarantee invitations to three majors and offer a fitting way to bookend their Amateur careers before turning to the paid ranks.

The first round was played in a few showers with Frenchman Antoine Rozner leading the 288 strong field with a course record of 7-under 64. The second day, however, was a much sterner test for the Australians with morning tee times sharing both heavy rain and strong “3 Club” winds.

No better illustration of the trying conditions was first round leader Antoine Rozner’s 12-shot fall from grace following his round of 76. The cut line of 64 plus ties came in at +5.

The best of the seven Aussies was Cameron Davis and David Micheluzzi at even par and in tied 6th position. Other Aussies to make the cut were Travis Smyth, Will Heffernan, Dylan Perry, Brett Coletta and Blake Windred.

Surprising Harrison Endycott and Cameron John failed to advance. Afterwards Endycott said, “I played well enough in the conditions but a triple after hitting a pot bunker put me outside the cut”.

The system of reducing ties to precisely 64 for the knock out stage produced some consternation in the Australian camp. Two players Brett Coletta and Blake Windred despite having been a shot inside the cut line at T49 were bound to play in a preliminary knock out stage to trim back the total number of players from 79 to 64.

Both Coletta and Blake managed to fight back and retain their place in the round of 64. The next two rounds would feature “mate against mate” with Aussies going head to head.

Smyth and Perry fought each other to go through to the round of 32. Perry led the whole way finding five birdies and ultimately winning 3&2.

Micheluzzi, Perry, Heffernan and Davis were the four Aussies who reached the round of 32.

Once again it was “mate against mate” with Cameron Davis teeing up against Dylan Perry. In an exciting match, with the lead changing hands on a number of occasions, Perry prevailed 1-up.

Davis said, “neither of us played particularly well, we chopped it around. I simply missed too many fairways.”

The next round saw Scot Robert MacIntyre account for Micheluzzi, 2&1, and Poland’s Meronk beat Perry 3&2.

“Obviously it’s a dream come true, you dream about moments like this when you are practising all those hours and when you’re not playing as well as you’d like to,” Scott said.

“It’s (playing in The Open) going to be completely new to me so hopefully I can get some decent practice rounds in with some people and see where I go from there.”