Grierson makes his move at Master of the Amateurs

Sydney’s James Grierson has fired a 5-under-par 67 to take the second round lead at the Australian Master of the Amateurs being played at The Royal Melbourne Golf Club.

Grierson, who won the Pacific North West Stroke title earlier in the year, started a stroke behind first round leader, Karl Vilips, yet late birdies on the closing nine enabled the Bonnie Doon club member to grab the lead from a number of challengers.

“I was able to close out the round well today,” said Grierson.

“It was tough as out there, pins tucked in tight locations and the greens were firm and fast. It’s a challenge and to score the way I did gives me plenty of confidence but this is Royal Melbourne and there are two more rounds to go, so let’s see how things go.” 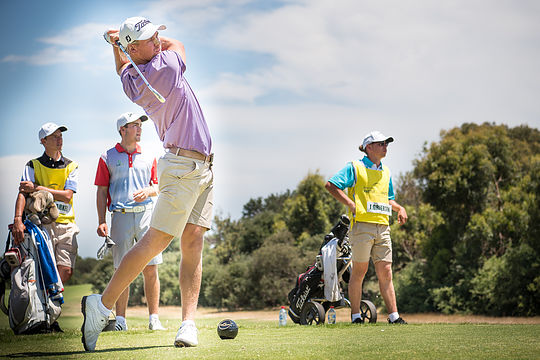 Overnight leader Karl Vilips, who at just 15 years of age, can be proud of what he’s already achieved to date at this event which is Australia’s highest ranked amateur tournament.

Vilips, who is an Aussie based in Miami, had the weight of media attention on him during his opening holes and some early bogeys enabled players more senior in years to make their move and they jumped at the opportunity.

Zach Murray, the 2015 MOTA Champion, fired an impressive 4-under-par 68 to move into a share of 4th position along with local member Matias Sanchez.

Another Victorian, Jack Murdoch played a stellar round to be two behind Grierson after a second round 67 with Charlie Dann, a winner twice this season on the National ranking events series after claiming the Keperral Bown and the Mandurah Open, is right on Grierson’s tail after firing rounds of 69-68 to sit at 7-under.

Royal Melbourne is sure to throw out the challenges as the course drys out and the greens become even more slick. The defence of this course are its greens and they have tested the world’s best many times over the years.

You can be sure that the same again is install for the world’s best amateurs over the next two days as they battle for the ‘Green Jacket’ and the honour of being named the Australian Master of the Amateurs champion.