Griffin started the final round a single stroke up on his playing partner, Hubbard and withstood challenges over the opening nine to keep in reach of his maiden PGA Tour victory.

Hubbard had the lead until he missed his only fairway of the final round on the par-5 15th into the high grass of a hazard. He was able to clear the ball out across the fairway into thicker grass before hitting his third into a fairway bunker where he missed a 2 metre par putt.

Harrington, who took 16 years to reach the PGA Tour, birdied the 15th with a two-putt from 3 metres, hit his tee shot to 1 metre for birdie on the 16th and was tied for the lead until a three-putt from 14 metres up the ridge on the 17th hole. He still closed with an impressive 67.

Locked in a tight race on the back nine with Hubbard and Harrington, Griffin took the lead with a 10 metre birdie putt on the 16th hole and then won with that 2 metre for par on the 18th. The victory sends Griffin to the Masters and the PGA Championship and gives him a two-year exemption on the PGA Tour.

“It’s mind-boggling,” said Griffin about the win and the associated spoils. “Just didn’t seem like it would ever happen, but at the same time, I believe in myself, and I was extremely calm out there today. Just bizarre.” 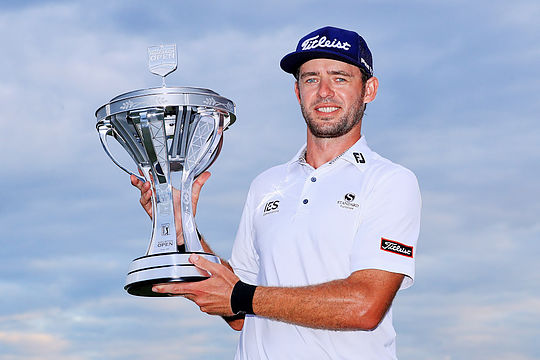 If anything, Sunday’s victory was always in the making considering Griffin’s form coming into the tournament with top-20 finishes this season at A Military Tribute at The Greenbrier, the Sanderson Farms Championship, the Safeway Open and the Shriners Hospitals for Children Open.

Griffin is also the only player to finish in the top-20 in every PGA Tour tournament since the new season started last month and now leads the FedEx Cup standings.

Rhein Gibson, the only Australian to make the cut, carded a six-over 78 on Sunday to finish the week at eight over. Aaron Baddeley, John Senden, Robert Allenby, Cameron Davis, Matt Jones all missed the weekend.