Australia’s Matt Griffin made the most of perfect conditions to shoot an eight-under-par 64 for a one shot lead after the first round of OneAsia’s one billion won (around US$900,000) SK Telecom Open on Korea’s Jeju Island.

Griffin, a winner in Korea last year at the tour’s Charity High1 Resort Open, had nine birdies and a bogey around the 6,732 metre (7,361 yard) par-72 Pinx Golf Club course – and it could have been even better if not for two three-putts. 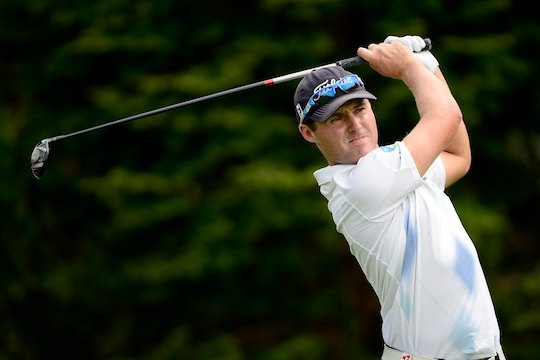 Korean veteran Kang Wook-soon surprised even himself to take sole possession of second place, while ten others were jostling for position at six under — including China’s Hu Mu, Australians Anthony Brown and Jason Norris, American David Oh and Michael Long of New Zealand.

Playing the course back-to-front, Griffin started with a birdie and then put on a masterclass from the 15th to the second with six in-a-row.

He three-putted the fourth for a routine par and repeated the sin on the seventh for a bogey, but birdies on six and nine put him in charge of the tournament.

“For a while I had visions of Thailand,” said Griffin, who finished the last round of the season-opening Thailand Open in April with eight birdies in-a-row for a career-low 64.

“I had a good go at eagle on the last today which would have given me a 63, but it wasn’t to be.”

Defending champion Kim Bi-o, who has been in the golfing doldrums since his victory last year, fared much better on Thursday and posted a 68, one better than star attraction K.J. Choi, who jetted in straight from the United States after finishing joint 48th on Sunday at The Players Championship, a tournament he won in 2011.

“I’m adjusting to the jet lag better than expected … my condition feels great,” said Choi. “I thought maybe two or three under would be a great round today, but the scores are even better.”