Victorian Matthew Griffin scored the biggest win of his professional career with a one stroke victory at the recent 2012 Charity High1 Resort Open in Korea’s Gangwon-do province.

The 29-year-old led by two overnight but held his nerve in a tumultuous final round for an even-par 72 that gave him a nine-under total of 279 and the winner’s cheque of around US$178,000. 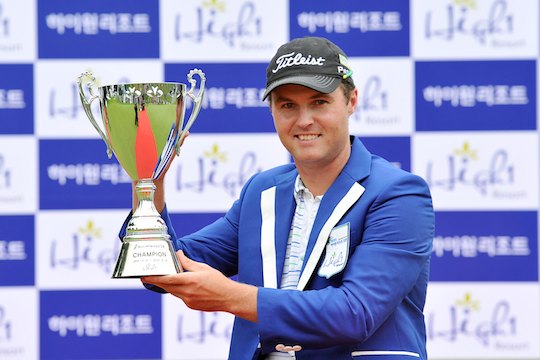 Kang Kyung-nam (68) and Park Sang-Hyun (71), both of Korea, pushed Griffin all the way around the hilly High1 Resort Country Club course but ultimately finished in a tie for 2nd, one shot behind Griffin.

22 year old Kim Bi-o, winner of two events on the OneAsia circuit this year and the OneAsia Tour’s leading money winner, was a shot further back and extended his lead at the top of the Money List in the process.

“I am really, really thrilled,” Griffin said after his victory. “This is what I have worked for all my life, so it is absolutely amazing to finally get there.”

NSW’s Aaron Townsend also contended throughout the final round but two late bogeys thwarted his chances, slipping back to a tie for 6th at 6 under par, 3 shots behind Griffin.

Victorian David McKenzie also finished in the top 10 after a final round 71 for a 3 under par total.

The win was by far the most significant of Griffin’s career, with his only other victory coming in the South Pacific Open in New Caledonia last year.

The victory propels him up the World Golf Rankings and OneAsia Order of Merit and will provide him with the security of a two-year exemption to the OneAsia Tour.

His first OneAsia title will also provide a confidence boost as Griffin plans to tackle the PGA Tour Qualifying School that will kick off at the end of November.

“This is immense,” said Griffin, a natural left hander who plays golf right-handed. “It gives me a lot of security and it also repays the faith that my supporters and sponsors have shown in me over the years.”

He dedicated his victory to Peter Beck, a friend and mentor who caddied for him occasionally in his amateur and professional days, and who died in 2010.

The next event on OneAsia is the Nanshan China Masters from October 11-14 where Kim Bi-o is the defending champion.