On an exciting day for Australian golf where the future was clearly on show in both the men’s and women’s tournaments, Griffin captured his home state title in spectacular fashion. 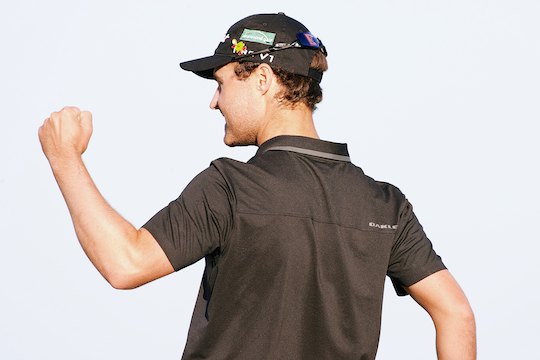 It took Griffin three playoff holes to overcome New South Welshman Matthew Stieger, the pair finishing deadlocked at 7-under par while overnight leader Brett Drewitt finished a shot back at 6-under par.

For Griffin, who had previously won a PGA Tour of Australasia event in New Caledonia and two OneAsia tournaments in Asia, the emotion-charged fist pump as he sank the final birdie putt on his fourth trip up 18 said everything.

“Incredible,” the 30-year-old said with eyes full of emotion.

“To win your state open is huge, aside from that the Australian Open is next.”

“It’s just great to win at home and I’ve been close before and it’s nice to get over the line.”

But Griffin’s title wasn’t a foregone conclusion at any stage throughout the day until that final putt dropped in the third extra hole.

With the leaderboard changing numerous times throughout the day, early on it could have just as easily been Stieger or Drewitt’s title.

But for Griffin, who has been somewhat of a bridesmaid in recent years, the result was both timely and welcome.

“A lot of times I’ve had myself in contention and the putts haven’t dropped and sometimes it happens for the right reasons and it did today, so it was nice,” he said.

“The two young guys were really fantastic, they didn’t make a mistake, so I really had to play some good golf to eventually get in front and get that trophy.”

“My childhood hero Greg Norman’s on there, so it’s nice to put your name on the same trophy as a great and there’s so many other amazing players on there, Peter Thompson is incredible.”

While the leading group drew all attention from the seven thousand strong crowd, there was still plenty of movement below the top three placings throughout the day.

Andrew Kelly and Terry Pilkadaris finished in a tie for fourth position at 4-under par while four players, (including Queenslander Ray Beaufils who shot a 7-under 65) finished in T6 at 3-under par.

The PGA Tour of Australasia now moves to Queenstown for the New Zealand Open, in which all Griffin, Stieger and Drewitt will all compete.