Heading into the final round of the 54-hole competition with a three-shot lead, Guan carded a bogey-free 4-under 68 to double-down on his domination of the event, leaving Oregon’s Collin Hodgkinson in outright second place on 4-under. 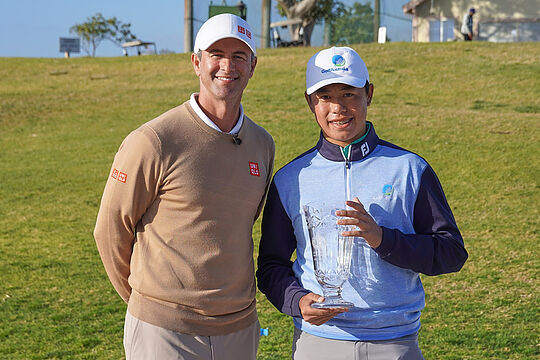 Adding to Guan’s excitement was Adam Scott’s presence at the event after finishing in 4th place in the Genesis Invitational at the Riviera Country Club just 90 minutes south the day prior.

Scott served as the announcer for the leading groups and spent the next few hours watching both the boys and girls events before greeting the winners at the end of the day and putting on a free two-hour clinic.

Guan, who plays out of The Australian Golf Club, and is still just 17-years-old has amassed an impressive resume in his short career. He is the reigning Australian Boys’ Amateur champion, the 2022 Harvey Norman A.C.T Week of Golf winner and won the NSW Junior title in 2020 and 2021.

As a 16-year-old he also finished runner-up at the 2021 NSW Amateur and two weeks later at the Australian Men’s Amateur Championship.

In the girls event, Brisbane’s Justice Bosio almost made it an Aussie double before a late case of nerves saw her drop six shots across her final six holes to finish at 3-over and two shots behind winner Frances Kim.

Like Guan, Bosio at just 17-years-old has been a prodigious winner of junior titles back home in Australia with five wins and numerous top-10 finishes.

Adam Scott continues a long tradition of offering junior golfers an opportunity to play in competitive events. Players including Greg Norman, Karrie Webb, Cameron Smith and of course, Jack Newton, help ensure that the strong lineage of Aussie golfers will continue well into the future.