Jeffrey Guan and Jeneath Wong have taken out the Australian Junior Amateur titles with the pair winning back-to-back titles at The Vines of Reynella in South Australia.

Wong’s one-under round of 72 took her to eight-under for the tournament to win by three shots ahead of playing partner Sarah Hammett, while Guan’s four-under 67 kept him three strokes clear of West Australian Joseph Buttress. 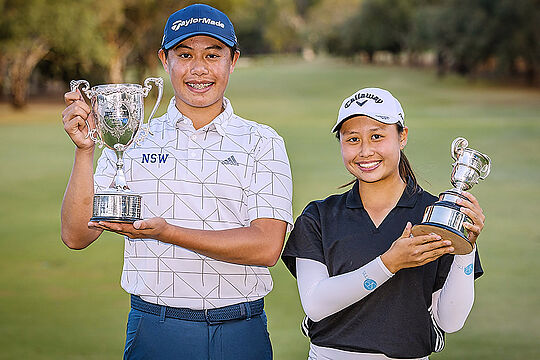 The victory for Wong sees an incredible seven consecutive wins in junior events and is a fitting finale for her junior career before embarking on a scholarship at Pepperdine University. Wong also won the Australian Master of the Amateurs back in January by an impressive seven strokes and was the only player in the field to finish under-par.

“I’m really excited and happy considering this is my last year playing this event so I’m really happy that I won,” said Wong.

“It really is the icing on the cake. I haven’t been playing that well in the last few weeks but this tournament I’ve improved quite a bit so I’m very happy.”

Guan was forced to dig deep over the closing stages of the final round to hold off a spirited challenge from Buttress, making birdies on 16 and 17 to secure the win.

“I saw on the leaderboard that I was one back with a couple to play,” said Guan. “At that point, I kind of had to focus a bit more on my game.”

“I had to try to work out how to get more birdies to fight my way back up the leaderboard. I’m pretty happy that I did that.”

The victory adds to Guan’s win at the inaugural Uniqlo Adam Scott Junior Championship which he won by eight shots at River Ridge Golf Club in California in February and his two NSW Junior championship titles. Guan was also runner-up at the 2021 Australian Men’s championship.