Matthew Guyatt leads day one of the Australian Masters following a first round of 7-under-par, 65, at Kingston Heath Golf Club in Melbourne.

Guyatt is two strokes ahead of world number five, Adam Scott, defending champion Ian Poulter and New Zealander Michael Hendry who are in a share of second place at 5-under par after rounds of 67. 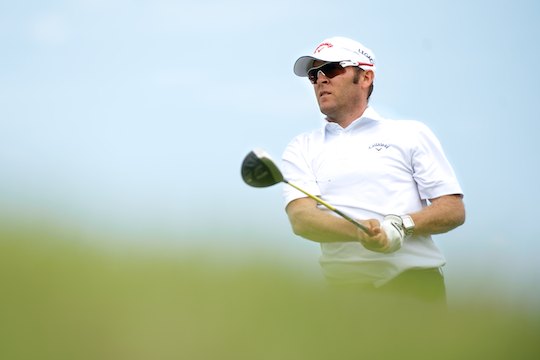 Guyatt has recently exhibited fine form and is scheduled to attend the Final Stage of the Japan Tour School in a few week’s after playing there in 2011.

Guyatt, who is based at Indooroopilly Golf Club in Brisbane, also won the NSW PGA Championship with a final round of 62 at the Wollongong Golf Club in 2011 and would love nothing better than to secure a major Australasian Tour victory.

Not accustomed to the Kingston Health layout, Guyatt was thankful for his impressive 7-under-par on unfamiliar territory.

“I have never played Kingston Heath, I need to spend more time here. I flew in early Monday morning and came here and spent the day here just chipping and putting and starting to understand the ball and how firm the greens are,” remarked Guyatt.

“At the moment that’s proved to be a pretty good decision.”

Adam Scott has had a good year but is yet to register a win, with the world number five describing today’s round as near as perfect. Scott is positioned well following the opening round and will certainly challenge for this title.

“The course’s defences were down today,” said Scott.

“There was no wind and the greens were soft and not very fast. Realistically, I felt 9 or 10 was possible for the way I played today if everything went my way.”

Likewise Poulter had nothing but praise for the conditions on the sandbelt course.

“I don’t think I’ve seen afternoon conditions like we’ve had today, it was perfect,” said Poulter.

“Five under is acceptable, but it’s a golf course that you if play well and you give yourself a lot of chances than you’d expect to hole a lot of putts. The greens are perfect and, if you hit your line, it’s got a great chance to go in.”

Full marks also go to Jake Higginbottom, proving today that he can step up to the plate and deliver in professional events.

Higginbottom recently won the City of Sydney Amateur to put amends to what otherwise was a disappointing international tour in the USA and UK.

Possessing a raw talent, it’s pleasing to see Higginbottom forging his name on this event with a solid opening round.