Bill Haas survived a scare at the final hole to earn a one-stroke victory over five players at the $5.7 million Humana Challenge in the California desert on Sunday.

Haas shot a final round 67 to finish at 22-under-par to win for the sixth time on the PGA Tour. This is Haas’ second victory at this event, which he also won five years ago. 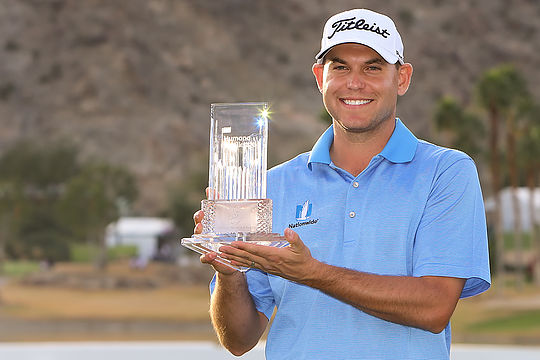 Coming down to the par-five final hole, Haas needed a par to win. A bogey by Haas would have forced a six-way playoff, which would have tied a US PGA Tour record.

Despite a few hiccups after his drive on the par-5 18th stopped on top of the front lip of a right fairway bunker, Haas was able to scramble for par and secure the win.

He relied upon his short iron play as he nailed a 160 metre 8-iron safely to the middle of the green to set up his winning two-putt par.

“I was fighting it today,” said Haas. “You can see on the last hole that I was grinding it out to the end.”

“I was lucky enough to make a couple of putts. The one on No. 16 was huge. I knew I needed that one to at least give me a chance here on 18.”

Haas earned US$1,026,000, a fraction of the US$11.44 million FedEx Cup fortune he made in Atlanta at the 2011 Tour Championship. His victory comes after his first winless year on Tour since 2009, as wrist issues dogged him throughout 2014 and forced him off tour for four months.

Second-round leader Matt Kuchar finished with a five-under 67 and he ended tied for second along with Charley Hoffman, Brendan Steele, Park Sung-Joon and Steve Wheatcroft at 21-under.

Matt Jones was the only Aussie to make the cut and finished at 13-under-par and for a share of 41st position. Stuart Appleby, Jarrod Lyle, Steven Bowditch and Cameron Percy all missed the weekend.

The PGA Tour moves to the Phoenix Open, where Tiger Woods is scheduled to play in that event for the first time in 13 years.

Woods sets out on his first season following back surgery by visiting a place he hasn’t seen since tying for fifth in 2001. That also was the year fans helped Woods by rolling aside a waist-high boulder ruled to be a “loose impediment” at the 13th.