Paul Haley II has taken out the Memorial Health Championship on the Korn Ferry Tour tying the tournament record with a 27-under-par finish for a three shot win over Austin Eckroat.

Played at Prince of Wales Country Club in Santiago, Chile, the victory propelled Haley to a PGA Tour card for next season. He posted a bogey-free final-round Sunday, starting with birdies on the first and second and would rattle off two more birdies on the 6th and 7th to finish out his front nine with a 4-under 31. On the back nine, Haley birdied 12, 13 and 16 to close out the victory. 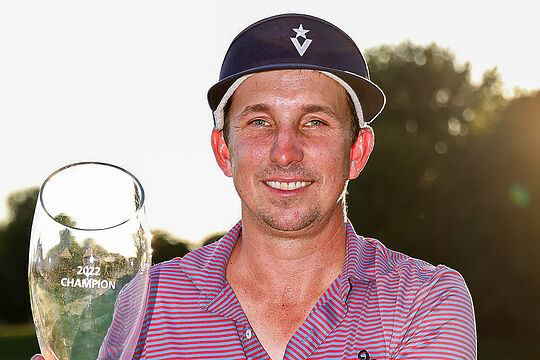 “It felt really good,” said Haley. “The second I hit my second shot on the green here I knew it was over. So really happy and couldn’t wait to get out of here.”

“It’s really hard to win, especially because everybody is really good now. Just have to be pretty much dialled in for four days to win a golf tournament, which makes it feel better when you do.”

“I think I shot 20 a couple times, but 27 I don’t know what happened to be honest with you. I just did everything really well.”

Haley had an impressive amateur career, winning the Texas State Amateur before playing collegiately at Georgia Tech. He would go on to win the Atlantic Coast Conference Championship before graduating and turning professional in 2011.

During the 2012-13 PGA Tour season the Dallas-based player made just three cuts in 18 PGA Tour starts to fall back onto the secondary and mini tours for the next three years before gaining status again on the Korn Ferry Tour in 2018.

With the win, Haley improved from 14th to second on the Korn Ferry Tour Regular Season Points List, and now trails China’s Carl Yuan by 399 points in the race for the No. 1 spot.

Rhein Gibson was the best of the Australians and the only Aussie to make the weekend before finishing in a share of 71st position. Curtis Luck missed the weekend as did Ryan Ruffels and Harrison Endycott.