Hot on the heels of Michael Long’s miracle pitch at last week’s Victorian Open, fellow Victorian Ashley Hall has repeated the dose with a chip-in birdie on the first playoff hole to claim the Mercedes-Benz Truck and Bus Victorian PGA Championship at Huntingdale. 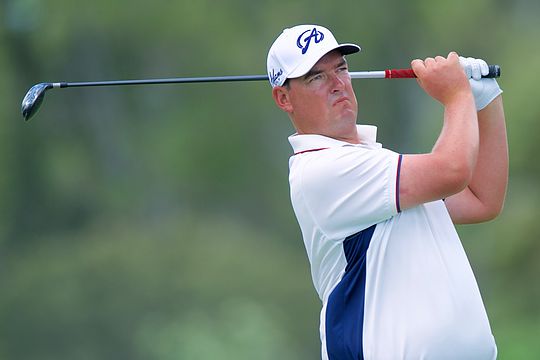 Returning to the 18th hole, McKenzie was safely on the green in two while Hall flew the green by five metres. Hall then played a delightful chip which hit the flag stick with some pace but fell into the hole.

A stunned McKenzie then had a ‘must make’ putt from around 8 metres but his valiant attempt shaved the hole to hand Hall the trophy.

“I’ve had three wins and I’ve been close in playoffs before,” a tearful Hall said after securing the $16,500 winner’s cheque and a spot in the lucrative Perth International in two weeks.

“I wanted to hit a good shot in the playoff and playing under the pump makes you really find out where your game is at early on in the year.”

“That hole (18) has been troubling me a lot lately, during the Masters it really troubled me. I haven’t hit good shots in playoffs in the last few years and that was a really good one there.”

Finishing a shot outside the playoff mark at 10-under was the ultra-consistent Matthew Millar, Anthony Houston, Matthew Griffin, Tim Hart, Adam Blyth and Stephen Leaney.

Rounding out the top-10 on the leaderboard at 9-under par were Todd Sinnott and Brad Shilton.

Despite his disappointment at losing, McKenzie also earns a place in the Perth International as do Scott Strange, Stephen Dartnall and American Ryan Carter, thanks to their cumulative earnings over the past two weeks.

The victory was a timely turnaround in fortunes for Hall who lost his playing status on the Web.Com Tour last year and needed to re-qualify for the PGA Tour of Australasia through Qualifying School.

“I said we should try to win one of these early on in the year and I can play them all now at the end of the year and the following year, so it’s nice,” he said.