It was Hall’s first major as she joined Karen Stupples (2004) as the only English player to win the Open since it was elevated to major status in 2001. Scotland’s Catriona Matthew also won this major in 2009.

Hall, 22, was incredibly solid throughout the week, dropping just three shots to par in four rounds as she reeled off rounds of 67-68-69-67 to win by two shots from plucky Thai player Pornanong Phatlum with South Korean So Yeon Ryu a further two shots back in third place.

Certainly Hall had the home crowd well and truly on her side and as she approached the final green with an unassailable lead with the crowd applauding enthusiastically. 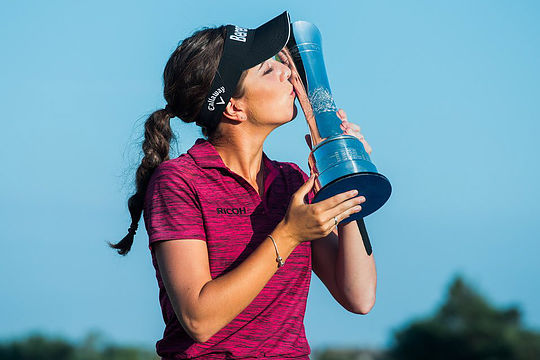 The day began with Phatlum at 13-under par and Hall one back, but everyone had their eyes on the penultimate group of Ryu and Sung Hyun Park, who were at 11-under and 10-under respectively.

Both were double major winners, but both played their way out of it early, Ryu with a triple bogey on No. 3 and Park by playing Nos. 4 through 7 six-over par, and it became clear that the championship was going to be decided in the final twosome.

“I always joked that a major would be my first win,” grinned Hall.

“I can’t believe it really happened. I played well today; I putted great.”

Hall averaged just 28 putts per round and was seven-for-seven in sand saves on a Lytham layout somewhat famous for its strategic bunkering.

Hall later explained: “There’s someone special at home who’s going through a very bad time, so this is for you, Grandad.”

“I’d also like to thank my dad for caddying.”

“Thanks for doing everything for me when I was growing up…and to my mum.”

“And to my boyfriend as well for supporting me.”

Hall later Tweeted: “It is too good to be true.”

“It was my goal when I was nine to win the British Open. I am so happy.”

“I just had to stay calm and patient. It was very close up to the last two holes and I holed all the putts today.”

“I was loving it deep down, hitting the shots under pressure. To get six birdies in the final round of a major is not bad.”

Minjee Lee finished the best of the Australians in outright 10th place with Su Oh another two shots back in a tie for 15th.

Hannah Green and Rebecca Artis were 55th and 61st respectively.