England’s Harry Hall nailed five birdies in his last seven holes of regulation play to force a playoff with American Nick Hardy at the Korn Ferry Tour’s NV5 Invitational only to then birdie the next three playoff holes to claim his second Korn Ferry Tour win.

Hall entered the day in a three-way tie for the lead at 16-under par with Hardy and Korn Ferry Tour rookie Davis Thompson, and fired an impressive final round 65 to finish regulation play with Hardy at 22-under. 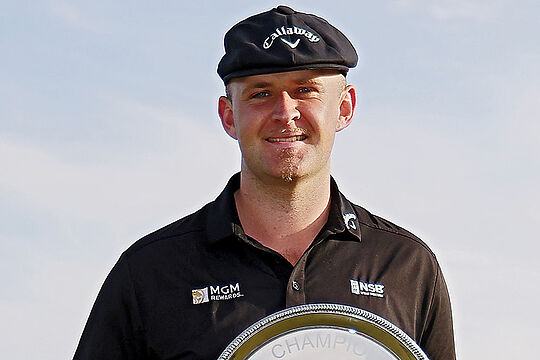 The two birdied the 18th hole another two times in the sudden-death playoff, after which Hall and Hardy carted to the 142 metre par-3 17th. Hall nailed his tee shot to within three metres of the cup with Hardy’s tee shot landing front edge of the green. Hall then drained his birdie putt for the victory after Hardy had chipped to within a metre.

“When I holed that putt on 17th to win, I was so in the zone and didn’t really think about anything else other than just playing golf and hitting shots,” said Hall.

“I was more focused on breathing. That’s kind of all I tried to do the last three hours is do my little breathing routine and execute the shots that I’m trying to hit. I got so in depth in doing that, that it was just another golf shot.”

With Sunday’s win, he earned 500 points and rises from 94th to 17th on the Korn Ferry Tour Regular Season Points List.

Aaron Baddeley finished the best of the Australians in a share of 13th position at 14-under-par. Rhein Gibson and Harrison Endycott shared 59th position to be the last of the Aussies to make the weekend.

The 2022 Korn Ferry Tour season continues Thursday, June 2, with the first round of the REX Hospital Open in Raleigh, North Carolina.