Denmark’s Joachim Hansen has claimed a maiden European Tour title with an impressive bogey-free round of 67 on the final day of the Joburg Open in South Africa.

Hansen finished two shots clear of 20-year-old Wilco Nienaber of South Africa. Nienaber carded a final-round 70 and saw his chance at a first tour title slip away with bogeys on his last two holes. 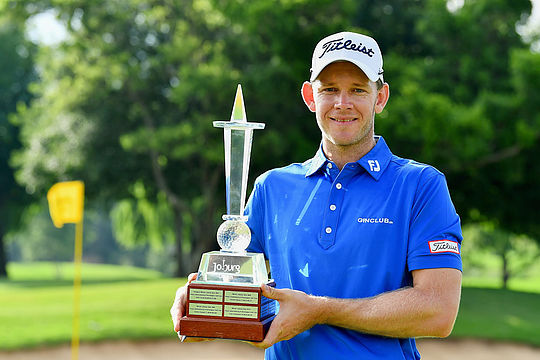 Entering the final day one shot behind Nienaber, Hansen played solid golf over the closing holes to secure victory after 146 attempts. Hansen birdied three of his first five holes on the back nine before a succession of pars through a hot putter as Nienaber struggled.

“I putted really well, almost haven’t missed a putt inside six feet and holed a lot of long ones as well,” said Hansen.

“It was a fun battle out there with Wilco. I kept the head calm out there and we stuck to the plan in terms of where we wanted to hit our drives and approaches. I kept pushing. It started slowly but suddenly the birdies came on the back nine.”

The Joburg Open returned to the European Tour schedule this year for the first time since 2017. It’s the first of three consecutive tournaments in South Africa before the season-ending DP World Tour Championship in Dubai which begins 10th December.

The DP World Tour Championship is the fourth and final Rolex Series event of the reshaped 2020 Race to Dubai, following on from the Abu Dhabi HSBC Championship, Scottish Open and PGA Championship. The Earth Course at Jumeirah Golf Estates in Dubai has hosted the season-ending event every year since 2009.

This year, Jumeirah Golf Estates’ Fire Course will also host the Golf in Dubai Championship presented by DP World, which takes place the week before the season ender.