Hansen carded a closing 68 on the Fire Course at Jumeirah Golf Estates to finish 23-under par, a shot ahead of Italy’s Francesco Laporta and Austria’s Bernd Wiesberger.

The Dane held off late charges from Wiesberger, who finished with eight birdies in his last 14 holes, and England’s Andy Sullivan, who ended with a remarkable five birdies and an eagle on the final hole to shoot 29 on the back-nine and get within two shots.

Hansen’s victory moves him to 43rd in the Race to Dubai standings and sees him qualify for the European Tour’s season-ending DP World Tour Championship, which happens to also be in Dubai this week. The 31-year-old is only the second Danish player to win in the United Arab Emirates and the first in 20 years after Thomas Bjorn won the 2001 Dubai Desert Classic.

“It means a lot,” said Hansen. “I really struggled finding the middle of the club on the woods so I didn’t drive it well – the putter helped me today, I putted a lot better today than yesterday so that kept me in the game.”

Australia’s Min Woo Lee had another stellar result finishing in a share of 4th position at 20-under, three behind Hansen. It was Lee’s third top-10 finish in his last five starts after finishing 8th at the Portugal Masters and in a share of runner-up at the Andalucia Masters. Lee is currently ranked 5th in the Race to Dubai and could well be in the mix again come Sunday’s final round. 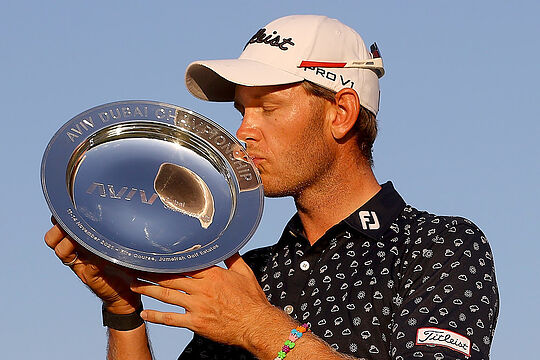 Jason Scrivener finished in a share of 31st position, to be the only other Aussie to make the weekend. Scott Hend missed the cut by a shot. The European Tour now turns to the season-ending DP World Tour Championship, where the 50 highest ranked players on the Race to Dubai Rankings will take on the Earth Course at Jumeirah Golf Estates, competing for a share of the US$9 million prize pot and the European No.1 title.

Scrivener and Lucas Herbert will join Lee at the season ender starting on Thursday, along with notables Collin Morikawa, Rory McIlroy, and Sergio Garcia.

Rising young gun Will Zalatoris has also entered. Zalatoris joined the PGA Tour as a Special Temporary Member and collected enough non-member FedExCup points to earn full-time membership for the 2021-22 season. He recorded eight top-10s and made 21 cuts in 25 starts, highlighted by a runner-up finish at the 2021 Masters Tournament.