Sweden’s Peter Hanson capitalised on the early errors of Rory McIlroy to hold on for a one-shot victory over the world number one at the BMW Masters in China.

Hanson posted a final round 67 for a 21-under-par total to capture his second European Tour title in three events and move behind McIlroy at the top of the Race to Dubai standings. 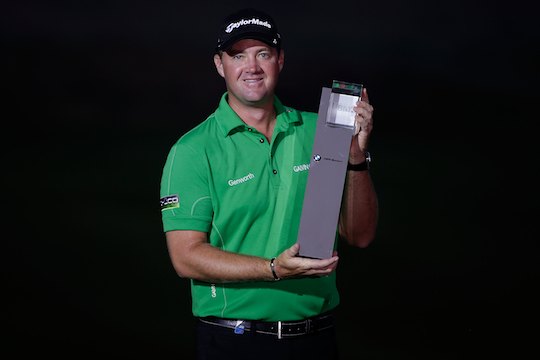 The 35-year-old, who won the Dutch Open in September, stretched his advantage at the start of the day from one shot to four after McIlroy recorded back-to-back bogeys from the fourth hole.

Hanson, who had the led the 23-year-old Northern Irishman by a single stroke overnight, had suddenly stretched it to four strokes inside five holes.

McIlroy bounced back with birdies on four of his next eight holes yet it was not enough to claw back Hanson despite a final hole bogey by the Swede.

It was Hanson’s sixth European Tour win with the $US1.66 million first prize the biggest of his career.

“It’s fantastic to win the BMW Masters and to go head-to-head with the world number one is always nice, but to come out on top, it feels great,” said Hanson.

“It’s kind of weird because when you have that kind of lead you’re playing a bit safe and I couldn’t really step it up towards the end, hit the shots and get it up close to the pin.”

“This is by far my biggest win so it feels great as we had just so many guys in the world’s top-10 here – this trophy is very, very special to me.”

It was McIlroy’s ninth second place finish on the European Tour.

McIlroy is staying in China, but only for a one-day head-to-head against Tiger Woods.

The rest of the week is being spent with his tennis star girlfriend Caroline Wozniacki in Bulgaria – who is playing a tournament there – but he returns to Asia for the Singapore Open and his defence of the Hong Kong Open.

Those events will give McIlroy the opportunity to clinch the money list double before the race-ending World Tour Championship in Dubai on November 22-25.

“I didn’t get the best of starts but it started coming together over the back nine – I was aiming to make him work for it,” said McIlroy.

“It would have been nice to hole that (birdie) putt on the last to have him think a little bit but it wasn’t to be.”

“He played well and deserved his win. To go out there with the lead and play the way he did and shoot 67 is very impressive, so he was always going to be tough to beat.”

A closing birdie by Luke Donald for a 66 enabled him to deny Ian Poulter, who had a 65, a share of third place.